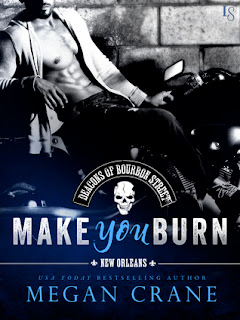 Meet the Deacons of Bourbon Street, bad boy bikers who are hell on wheels—and heaven between the sheets. Megan Crane revs up an irresistible new series co-written with Rachael Johns, Jackie Ashenden, and Maisey Yates.

Sean “Ajax” Harding’s oaths are inked into his skin. Once second-in-command of the Deacons of Bourbon Street motorcycle club, he left New Orleans to protect the brotherhood, and only the death of his beloved mentor, Priest Lombard, could lure him back. Walking into the old hangout gives him a familiar thrill—especially when he gets an eyeful of the bar’s delectable new owner. A wild ride with her is just the welcome Ajax needs. Then he realizes that she’s Priest’s daughter, all grown up and totally off limits.

Sophie Lombard loved her father, not his lifestyle. She’s done with bikers . . . until Ajax roars into town—arrogant, tough, and sexy as ever. And although he treats her like the Catholic schoolgirl he once knew, Sophie’s daydreams tend to revolve around sin. With the very real possibility of heartbreak looming, Sophie knows better than to get too close to an outlaw. But every touch from Ajax is steamier than the Louisiana bayou—and heat like this may just be worth getting burned.

My Make You Burn Review ...

I'm such a sucker for MC books that I was hoping I was going to love this one.  Sadly that didn't happen.  I liked it enough but it didn't wow me what so ever.

"Funerals and dramatic wills and Ajax taking an old lady.  I'd cry a little a bit if I cared, I really would."

Sophie Lombard is the princess of the Deacons MC  & Sean 'Ajax' Harding is the exiled old VP of the Deacons MC.  Now that Sophie's dad and the president of the MC dies it brings Ajax back to his home, that he never wanted to leave in the first place.

Sophie is the little girl who is now a full fledge woman with daddy issues.  As she always felt like the MC meant more to him than her.  So when she hooks up with Ajax she fears it will happen all over again.

~ Sophie might not have had the slightest idea what she was doing with this man or what it all meant, but she did know this:  if you were already falling, there was no point debating the how or the why.  There was only controlling the landing.~

Ajax sees a woman that catches his attention than lo and behold she happens to be the daughter of the old president.  Which should be forbidden but he's MC and makes his own rules.  So he takes her hard and forever in about 3.0 seconds.   Their whole relationship basically happened over 4 days, which was a bit too quick for the supposed depth of the emotions between the two.

"My little junkie.  I'll be your heroin."

What I didn't like about this book, was the predictability of the story and the attempt for the characters to be more robust and raw.  But in the end the relationship was supposed to be hot and heavy and love at first site but it came out to rushed and over the top.  The MC part felt like MC lite compared to other MC books.  What I did like about the book was the potential of the book and the idea of it.  This series has potential and I like the fact that it is a collaborated series with four authors.  Will I read more from this series?  Yes, as I'm curious how the other authors will do with Blue, Cash and Prince.  This was my first Megan Crane book and it was okay experience,  but I would like to definitely read more from her before I have any real opinion.

Posted by Live Read and Breathe at 21:04