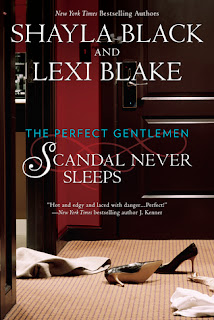 They are the Perfect Gentlemen of Creighton Academy: privileged, wealthy, powerful friends with a wild side. But a deadly scandal is about to tear down their seemingly ideal lives . . .

Maddox Crawford’s sudden death sends Gabriel Bond reeling. Not only is he burying his best friend, he’s cleaning up Mad’s messes, including his troubled company. Grieving and restless, Gabe escapes his worries in the arms of a beautiful stranger. But his mind-blowing one-night stand is about to come back to haunt him . . .

Mad groomed Everly Parker to be a rising star in the executive world. Now that he’s gone, she’s sure her job will be the next thing she mourns, especially after she ends up accidentally sleeping with her new boss. If only their night together hadn’t been so incendiary—or Gabe like a fantasy come true . . .

As Gabe and Everly struggle to control the heated tension between them, they discover evidence that Mad’s death was no accident. Now they must bank their smoldering passions to hunt down a murderer—because Mad had secrets that someone was willing to kill for, and Gabe or Everly could be the next target . . .

I gotta admit that this is my first book by either Shayla Black or Lexi Blake.

What have I been missing all this time?

"Someday you're going to go too far, Mad, and I only hope we can save you then.  As for this time, we didn't do anything but be young and stupid.  Miss Jones is single, and because Gave has a five o'clock shadow by noon and a surprisingly large dick, I understand how she might have believed he was older.  The only one who did anything criminal was dumbass over here."  He pointed to Mad.

Life has caught up with Maddox causing Gabriel (Gabe) Bond to not only lose his best friend but for him to be stuck smack dab in the middle of a scandal.

"God, Mad was such a douchebag.  I miss him already."

After the funeral Gabe sees someone who he would like to help him take his mind of losing Mad.   Everly (Eve) Parker has lost not only a friend but a mentor so when she gets the chance to lose herself for a bit she jumps on it.  One weekend to be free, what could that hurt?

After a steamy weekend together, real life causes Eve and Gabe to have to go back to their normal everyday lives.  What they didn't expect was for the lives to now intersect.

I did like Everly for the most part, but as you all know I'm never a fan of insecure woman, so she did have a good dose of 'why me, when you can everyone else' internal drama going on.

With Gabe, comes his group of gentlemen, whom are a more of a family than just friends.   The reunion between Gabe and Everly is not a favored one, when Gabe gets his knickers in a knot with false information and assumptions.  Since Everly is in charge of security she tries to help Gabe, even though she doesn't want to after he starts to treat her poorly.

Before Mad had died, he got himself knee deep in a pile of shit and now between Everly and the other gentleman they're trying to make head way and solve why Mad was killed plus fall in love.  Why not?  What better time to fall in love, then in the middle of a mystery, but really when is a good time?

This book started off decently strong but ended up with me wanting a bit more in the end.  There push pull quick relationship was okay but didn't wow me.  I liked the suspense as it was building, then with its crescendo it left me a bit disappointed.   While this huge puzzle was getting solved Gabe and Everly were quickly falling head over heels in love, but this union felt too fast too soon which didn't engage me enough with them throughout the book. 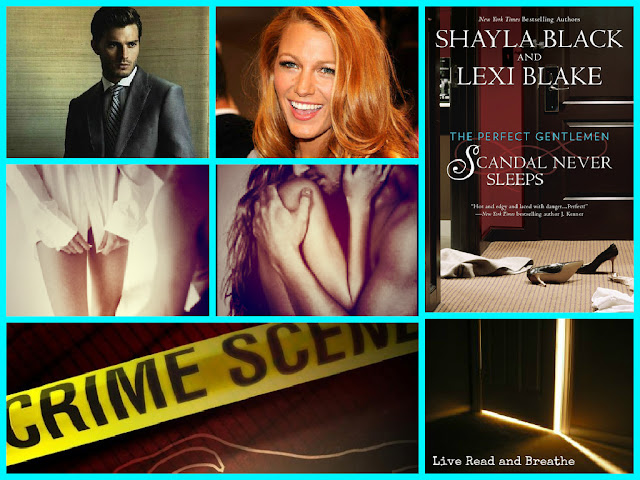 Did I like this book?  Yes, just didn't love it.  Would this book cause me to read more from Shayla Black or Lexi Blake?  Yes, it has intrigued me enough to read more from this series and from both of these authors.   Favorite Part?  The gentlemen.  I love them.  All of them.  Each one made me wanting more, which is why I want to continue with this series?  Least favorite part?  Hmmmmm, I gotta say it's a tie with Everly and the escalation of their relationship.  I didn't fully connect with Everly or truly feel their huge bond, which is why I was left wanting more.  Why was I disappointed with the crescendo of the plot?  Well, it was like slowly driving up a mountain and once you get to the top it was really just a hill.  As the puzzle was getting solved, I was enraptured with the idea of it and then boom most of the pieces were put together, basically in one speech, with just enough unfinished pieces to continue the series.  Then all of a sudden it was pretty much wrapped up and then there was an epilogue. Huh? However, I will for sure continue with the series as I need to know to all the whys and hows of this mystery.