Never in your wildest dreams could you begin to imagine all the filthy and depraved things that go on inside The Wicked Horse. Step inside and Woolf Jennings will make every one of your dirty fantasies come true.

Sweet Callie Hayes has returned home to Wyoming and is looking forward to starting her life over again. After a night of impetuosity, she’s managed to put herself right in Woolf’s line of sight… the man who she foolishly offered up her virginity to years ago and was flatly turned down.

Now Woolf is seeing that Callie is all grown up and has a kinky side to her that leaves him as confused as it does turned on. Worse yet, both Callie’s dirty desires and sweet heart are getting under his skin, and making Woolf question everything he’s ever believed about himself.

New York Times and USA Today Bestselling Author, Sawyer Bennett is a snarky southern woman and reformed trial lawyer who decided to finally start putting on paper all of the stories that were floating in her head. Her husband works for a Fortune 100 company which lets him fly all over the world while she stays at home with their daughter and three big, furry dogs who hog the bed. Sawyer would like to report she doesn't have many weaknesses but can be bribed with a nominal amount of milk chocolate.

Sawyer is the author of several contemporary romances including the popular Off Series, the Legal Affairs Series and the Last Call Series.

Wicked Fall is a spin off series from Shaken, Not Stirred (Last Call #5).  You don't have to read the Last Call series to love this book.  However, it does help a bit to meet Woolf before and understand him a bit more.  Woolf Jennings happens to be the little brother of Tenn Jennings.  Like his older brother Tenn, he too wants more than what his lineage had destined for him. 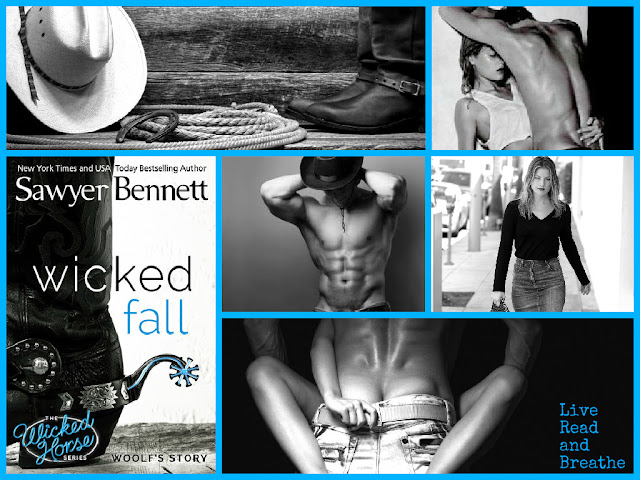 Woolf Jennings may be the brother left to run the family business but he's also a man who likes his kink when it comes to sex.  Since he has been in college he has been full steam ahead in the avenue of sex.  So, it makes perfect sense to open up a night club/ secret sex club on his property with his best friend and fellow kink lover Bridger.

Now that the club is open, all is well in Woolf's world, until he comes face to face with his 'what if' of all those years past.  His old best friend's little sister Callie Hayes.

Callie Hayes has always loved Woolf but after being once rejected she hangs up that dream.  She settles for simple and easy until that too explodes in her face.  Now back home she wants to find herself again, but will seeing Woolf again help or hinder this new Callie?

"Don't ever call yourself 'pathetically dull' again because that was single-handedly the sexiest, most exciting thing I've ever seen in my life."


Once Woolf sees Callie again he gets conflicted with coming to terms of his personal preferences and the sweetness of wanting Callie.  But he thinks he can't have both.


"I always wanted you, Callie,"  he says, and I hear truth in his words.  "I just didn't think I should have you.  Big difference."


I did like the idea of Woolf and Callie but at times the couple was a bit lack luster.   Woolf was supposed to be strong, sexy and kinky but his conflict with himself and the possibility of Callie at times made me not love him to the full extent I could have.  Callie for me was just meh.  She wasn't bad or anything but there just wasn't anything super exciting about her that made me fall in love with her.

But let me tell you though that scene in the cabin.  HAWT!

"Just know that what's happening right here . . . right now . . . it's nothing but an experience.  It doesn't change the way I feel about you."


For most of the book Callie was just meh and then all of a sudden she turned super weak, which made her even less endearing in my eyes.


"Because I promised my father I wouldn't."  (My bad I thought she was an adult not a child)


Thankfully Callie eventually finds a backbone and Woolf . . . well he finally sees the light.    Thank goodness for that, but my question is what happened with Colton?  That storyline seems to be left unfinished.  Hopefully it will be finished in the next books in this series.   I'm excited for Cain's story but I was hoping the next story was going to be Bridger.  I guess we will have to wait a bit longer for that one.

This is one of those times where I liked the idea of the story more than the actual story.   If this book was based solely on chemistry it would have gotten a gold star.  However, the main couple had more potential then they ended up being in the end.  Did I like them? Yes, I just didn't love them.  As I said earlier they were a bit lack luster and a tad forgettable.  However, Bridger, now that man intrigues me.  I can't wait to find out his story.  Was this my favorite Sawyer Bennett book?  Sadly, no but it was still good.