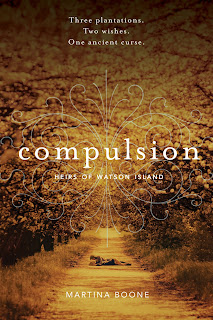 Three plantations. Two wishes. One ancient curse.
Three hundred years ago, an ancient spirit cursed one of the founding
families of Watson Island and gave the other two magical gifts that
became compulsions. Arriving for the first time at her aunt’s plantation
home, Barrie Watson finds herself haunted by the ghosts of a generations-old
feud and hunted by forces she can’t see. With the help of Eight Beaufort, who seems to know what she wants before she knows herself, the last Watson heir starts to unravel her family's twisted secrets. What she finds is dangerous: a love she never expected, a river that turns to fire at midnight, a gorgeous cousin who isn’t what she seems, and very real enemies who want both Eight and Barrie dead. 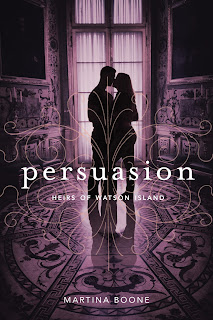 As reporters chasing rumors of a stolen shipment of Civil War gold
descend on Watson Island, Barrie Watson discovers more is buried at
Colesworth Place than treasure. A mysterious, magical man claims the
key to the Watson and Beaufort gifts and the Colesworth curse also lies
beneath the mansion, and Barrie has no option but to help him find it.
While she and Eight Beaufort struggle to make sense of the escalating
danger and their growing feelings for each other, Barrie must decide not
only whom to trust, but which gift is more reliable—Eight’s or her own.
With the fate of the founding families at stake, she has to choose between what she feels deep in
her heart and what will keep her loved ones safe.

* This is a book that creates a fictional island among the barrier islands of South Carolina and weaves in some
actual events and historical facts. How might the use of the fictional setting may signal her intent to make the
story more of a fantasy than it first appears?
* What character did you relate to most in the story? What do you think made that connection for you?
* Would you want a gift like the ones in Compulsion? If you had to have one, which would you rather
have, Eight’s or Barrie’s? Why?
* If you could ask for a small magic or a wish, what would it be?
* Do you believe in “curses” or do people determine by their actions what happens to them? Was the
Colesworth family the only family with a “curse”? Why or why not?
* Barrie had an unusual upbringing and relationship with her mother Lula. What does Barrie learn at
Watson’s Landing that challenges how she’s always seen her mother?
*  What did Barrie do differently from Lula or Pru to change the course of her life and her relationship with
Watson’s Landing and the gift? Would you welcome what happened to her, or would you fight it?
* Barrie fights her attraction to Eight both because he’s leaving Watson Island and because his gift makes her wonder if she likes him because he knows the right things to say to her. How much do you think the gifts play into their relationship?
* Eight says he was attracted to Barrie because she was ‘interesting, unpredictable and a little big magic.’
Do you think this is true of most romantic relationships? Why or why not?
* Pru says that love is made of “memory and hope and heartache that weave themselves into the very core of who you are.” How was this true for Barrie? Is it true in your life? 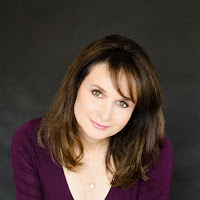 Born in Prague, Martina spoke several languages before she learned English after moving to
the U.S. She has never fallen out of love with words, fairy tale settings, or characters who
have to find themselves. The founder of AdventuresInYAPublishing.com, a Writers Digest
101 Best Websites for Writers site, Martina also runs the First Five Pages Workshops for
writers getting ready to submit their manuscripts to agents. She's also the founding member
of YASeriesInsiders.com, a blog dedicated to promoting literacy and love of reading by
connecting fans from various fandoms with authors and great new series books.