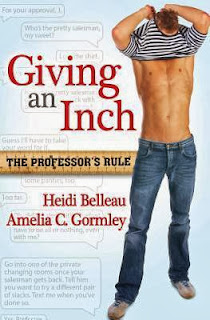 Giving an Inch (The Professor's Rule #1)

History grad James Sheridan thinks his biggest problem in life is trying to find a suitable outfit for his upcoming Ph.D. candidacy exam. That is, until he accidentally texts a changing-room selfie meant for his fashionable sister to his ex, the domineering Professor Carson.

James and Carson haven't seen each since James fled their power games two years ago. Back in his undergrad days, Carson was his Professor, and not just in the academic sense: a man of unusual tastes and extreme sexual demands, James had been happy to sate Carson's savage appetites. Too happy, in fact. He never could trust himself not to let Carson push too far.

Now James is older and wiser, and sharing some seriously flirtatious vibes with a cute menswear rep. When Carson replies to James's errant text, ready to pick up where they left off, James can't help being drawn back into Carson's control. It's only when Carson suggests involving the salesman that James has to ask himself how far is too far, and whether he's willing to go there with Carson again.

I happen to read the second book first which helped me get into the psyche of James and Carson.

For James, Carson helped him blossom and become the man he is today but in the process he also hindered and confused him.

As James as grown he starts to figure out what he wants and needs. As James accidentally re-connects with Carson he is forced to make a decision between having balance in his life as well as accepting what he needs. 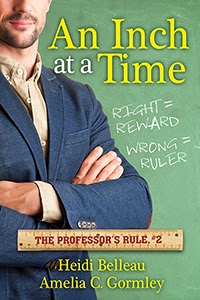 by Heidi Belleau (Goodreads Author), Amelia C. Gormley (Goodreads Author)
James Sheridan is failing history. Luckily, his professor is a rumored pervert, and James isn’t too proud to pay for a better grade with his body. Professor Carson lives up to his reputation, but he’s not unethical enough to take sexual bribes. What he can offer is some highly unconventional tutoring . . . creative use of a ruler included.

The deal? Studying, followed by a “quiz.” Wrong answer? Spanking. Right answer? Reward. Ace the final, earn some mindblowing sex. It’s harder work than sexual bribery, but it beats the volunteer tutors at the student center.

After a few study sessions, James realizes he wants way more than a grade from Professor Carson, even if he’s not sure what that is. Carson’s a silver fox, all right, but James isn’t “bent” the way Carson is, and for him, the spankings are only supposed to be a means to an end. But the better he gets at history, the more he realizes he likes getting answers wrong just as much as getting them right.

This title is #2 of the The Professor's Rule series.

Buy AN INCH AT A TIME (Kindle)

Here we get to find out how James and Carson came about.

For James he hated learning History so he propositions Carson his professor to get a better grade. Instead Carson offers James a spanking initiative to help him learn the concept.

Not only did James grab the concept but he also grabbed Carson's heart. 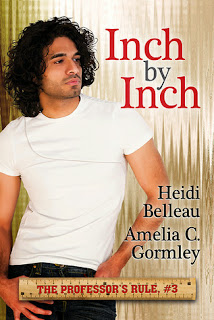 Inch by Inch (The Professor's Rule #3)

by Heidi Belleau (Goodreads Author), Amelia C. Gormley (Goodreads Author)
After two long, kink-free years apart, James Sheridan has reunited with his Professor: the sexy, dominant Evander Carson. But this time, things will be different. James is older, more sure of himself, and confident that he can draw the line between Carson’s demands and his own principles.

One of those lines is gorgeous menswear salesman Satish Malhotra. After their steamy dressing room encounter, James feels an unexpected connection to Satish, and he wants to explore it further. But Carson’s involvement—in James’s life, and in James and Satish’s budding relationship—complicates things.

Carson’s penchant for using other men in their sex games has always troubled James, and he’s adamant that Satish not be just another notch in their whipping post. But when Satish learns what prompted James to pursue him in the first place, will James’s new ability to draw the line even matter?

Here we have James and Carson trying to make whatever there relationship work but a kink comes into their plans in the form of Satish.

When James finally gives in to Satish which is what HE wants and not what Carson has suggested he does.

After experiencing the sweetest of Satish to Carson's harshness.  He finds that he wants both but once Satish finds out about Carson's games he bails out leaving James with Carson.

For me if I could have my wish I want a relationship with the three of them as it seems to not only be what James wants but what he needs. (Fingers crossed I get my wish) , This series started off as a meh! for me but as it is picking up momentum I'm starting to get hooked waiting to find out what happens. Which leaves me now eagerly waiting for number 4.

Posted by Live Read and Breathe at 22:43