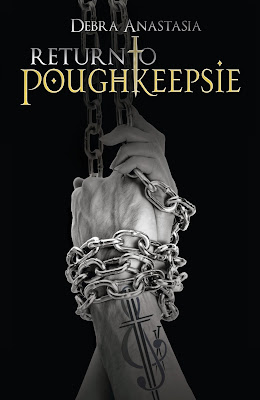 Summary:
Beckett Taylor is a murderer. His calling, his craft are destruction and intimidation—whether he wants it that way now or not. He left Poughkeepsie to keep his brothers safe, to keep Eve safe. Set up with happy lives to live, they’re better off without him, right?

But all his willpower crumbles when he hears his brother Blake’s frantic voice on the phone. An unknown enemy has moved in on his old territory, and Livia’s been taken. In an instant, Beckett knows it will take an attack only he and Eve can execute to bring her back. All his self-imposed embargoes are torn to shreds, perhaps along with the new man he’s struggled to become.

In this emotional and action-packed sequel to Poughkeepsie, Debra Anastasia conjures a tale of love at its most raw and ragged. With Beckett and Eve, how could we expect anything less? But even when it’s messy, not magical, true love perseveres. Real love finds a way—for better or for worse until death does part.


Bio:
Debra Anastasia is busy, just like every other mom. There's dinner, the dogs, the two kids, the two kids, and her ongoing battle with...ahem... digestive issues, which combined with her adolescent boy sense of humor makes for colorful and sometimes cringe-worthy social media updates. Her first love and crowning achievement is her thriving career as the weirdest mom on the block.

Her writing started a decent handful of years ago when--along with the animals and humans in her house--the voices of characters started whispering stories in Debra's ear. Insomnia was the gateway to plots that wouldn't give up, wouldn't let go. Now they stalk her everywhere. Halfway through making lunches, a twist takes hold and--fingers full of peanut butter--she finds somewhere, anywhere to write it down.

She's eternally grateful to Omnific Publishing, which has now published four of her books: two in the Seraphim Series and two in the Poughkeepsie Brotherhood Series, as well as her novella, Late Night with Andres. That one is special because 100% of the proceeds go to breast cancer research. (So go get it right now, please!) She also very much appreciates her open-minded readers, who embrace everything she has to offer, with a focus on anti-heroes and bathroom humor.

Debra lives in Maryland with her family. You can find her at DebraAnastasia.com and on Twitter @Debra_Anastasia. But be prepared.

I was so excited to read this book and once I got the chance to read it I kept putting it off as I was terrified to find out what happened.  Because after Poughkeepsie which as pure perfection I didn't know if this book was going to be a hero or a zero.  I so wanted for Beckett to get his HEA.  After putting it off long enough I took the chance and jumped right in.

Oh Beckett! My heart breaks for him as he has the hugest heart but a eff'd up way of dealing with it. However, through his own personal turmoil what he does know is love and that's what keeps him going. If it wasn't for the love of his brothers and Eve, Beckett would have given up so long ago.

"Yes. There was Beckett. He just knew there was more to me. Add Blake had an aura, you know? Like he was something special. You just wanted to help him, But Beckett, he wanted to help us both. He did help us both. And I know he's a criminal. I know that. He's made terrible choices, but sometimes I know he didn't really have a choice."

Beckett realizes what he needs to do and he goes to fix things for himself but ....

For Eve who is beyond broken but in her darkest place she found love again with Beckett but 5 years is a long time to wait.  I was so torn with wanting Eve to have her normal life that she craves and her crazy ass life with Beckett but in the end I am a diehard Team Beckett for sure.

However in Poughkeepsie things aren't always rainbows and unicorns.  Beckett and Eve come back to Poughkeepsie to keep their families safe from the shit show of crazy that is showing up there.

So much drama and hard core love going down in this book but we also get to see the continuing love of Liv and Blake  & Kyle and Cole.

I love the way Debra Anastasia writes.  This series is filled with so much unconditional love, brokenness, hope, and second chances in a world of wrong.

In the end I was so happy as I was happily jumping to my own conclusions for their HEA... then as you read on there was a sneak peak to book 3 which caused my heart to stop after the cliffhanger teaser.