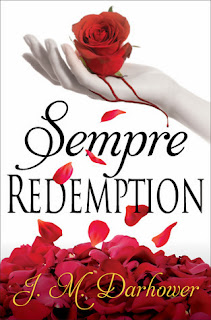 In this thrilling and sexy follow-up to Sempre, two young lovers struggle to keep their relationship intact after they become deeply enmeshed in the dangerous mafia-run crime ring they once tried to overthrow.

Haven Antonelli and Carmine DeMarco have been through a lot. Haven was taken in by Carmine’s father, and with his family’s help, she escaped a gruesome fate. However, saving Haven from the dark intentions of a mafia family cost Carmine a steep price: he was forced to swear loyalty to them.

Now, still passionately in love, Carmine and Haven must face the fall-out of Carmine’s forced service, as Haven discovers terrifying secrets about the family that enslaved both her and her mother—and why she matters so much in this intricate web of lies.

JM Darhower is the author of countless stories and poems, most of which only she has ever read. She lives in a tiny town in rural North Carolina, where she churns out more words than will ever see the light of day. She has a deep passion for politics and speaking out against human trafficking, and when she isn't writing (or fangirling about books) she's usually ranting about those things.

Chronic crimper with a vulgar mouth, she admits to having a Twitter addiction. You can usually always find her there.

Excerpt
Carefully, so not to wake Haven, he slipped from underneath her and climbed out of bed. He tiptoed across the room to the window and pulled some slats of the blinds apart to look out into the night. It was nearing three in the morning, the sky pitch black and the city quiet. Carmine surveyed the street, looking for any sign of trouble, and tensed when his eyes fell upon a car out front.
A vaguely familiar looking dark Chevy Camaro.
He stepped back from the window and gave Haven a quick glance before heading out of the room. Instinct took over, every move calm and calculating. He found his pants and pulled them on before grabbing his gun downstairs. He made sure it was loaded as he quietly slipped out the back door. He headed around the house and came up behind the Camaro, eyeing the license plate.
The moment he saw the letters JK, his adrenaline kicked into overdrive.
Staying in the shadows, he watched the car for a bit. The man was alone with the driver’s side window down, his attention focused away from Carmine’s house. Every time headlights flashed nearby he would watch them like a hawk until they passed. He was waiting for something, but Carmine wasn’t sure what until a set of headlights shined their way. The man ducked as a black Mercedes sped by them before swinging into a driveway about a block away.
Corrado.
Carmine wasn’t sure what to do, torn between reacting and alerting Corrado, but he didn’t get much time to consider his options. The driver’s side door swung open and the guy climbed out, keeping his head down as he started down the block. Without even thinking Carmine followed him, dodging streetlights while trying to keep up with his pace. The man slowed when he neared Corrado’s house, staring at it peculiarly like he was trying to assess how to get inside. The living room light was on and Carmine could see shadows, Celia’s laughter faintly filtering out of a cracked window.
The man ducked beside Corrado’s house and Carmine hesitated, taking a deep breath and clutching his gun before darting behind him. The invader had almost made it to their backyard when he heard Carmine’s footsteps. He swung around, alarmed by the presence, but it was already too late.
Carmine slammed him into the side of the house, shoving his gun against his temple. “If you move, I’ll blow your fucking head off.”
He cursed and shook as Carmine patted him down, frantically pulling everything out of the guy’s pockets. He found a gun in his coat and made sure the safety was on before sticking it in his waistband.
Grabbing the man’s wallet, Carmine flipped it open and yanked out his driver’s license. “Oisin Quinn. What kinda name is that?”
“Don’t hurt me,” he begged. “I’m not looking for trouble!”
“Bullshit,” Carmine spat. “You don’t lurk around this neighborhood with a gun if you aren’t looking for trouble.”
“I swear it’s a mistake!”
“What is?”
“This!”
“What the fuck is this?” Carmine asked, pulling him away from the house and shoving him into the backyard. He stumbled but caught himself before he fell, and hesitated for a second before he took off sprinting through the yard.
For a brief moment, Carmine remained frozen in utter disbelief. He had just let go of the guy. How fucking stupid could he be?
Adrenaline kicked in again. Carmine aimed with his finger on the trigger, a hair away from pulling it, but lowered the gun and took off after him instead. Carmine managed to catch him, tackling him in the grass at the edge of the yard. Panicked, the man swung, trying to fight Carmine off, and his fist connected with the right side of his jaw. Pain ripped through his cheek, sending him over the edge.
If he wanted a fight, Carmine was going to give him one.
He pulled his arm back that clutched the gun, slamming him straight in the face with it. A lifetime worth of aggression came pounding from his fists, disappointment and anger, shame and heartbreak. Carmine didn’t know the man, but that mattered not—he took his pain out on him, battering him with pent up hostility he needed to let go of.
After he was beat down, Carmine pulled him across the yard and forced him on his knees right outside Corrado’s back door.
“Stay there, motherfucker,” he spat, giving him a swift kick in the side out of frustration. His jaw ached and he was out of breath, blood splattered on his hands.
“I’m certainly glad you decided not to shoot him.”
The voice caught Carmine off guard. He looked up, seeing Corrado standing motionless at the back door, watching them. “Fuck, how long have you been there?”
“Long enough.”
“And you couldn’t help me?” he spat, annoyed he had just watched.
“You seemed to have it handled,” he said. “Besides, it was quite entertaining.”
Carmine glared at him. “Entertaining? There’s nothing entertaining about this!”
“I disagree.”
“Well, you’re wrong,” Carmine said, reaching into his waistband for the guy’s gun. He cursed yet again when he came up empty-handed and glanced around, realizing it had fallen out during their scuffle. He found it a few feet away and picked it up, handing it to Corrado when he stepped outside. “He could’ve killed me.”
Corrado laughed dryly. “You’re exaggerating. You had him, no problem.”
“You couldn’t have fucking known that.”
“Yes, I could. He didn’t do his homework if he parked in front of your house.”
“How do you . . . ?” Carmine stopped, narrowing his eyes when it struck him. “Wait, you knew he was there?”
“Of course I did,” he replied. “He wasn’t sly, Carmine. Even you noticed him.”
“Son of a bitch,” he grumbled, aggravated. “I did all of that for nothing?”
“I wouldn’t say it was for nothing,” Corrado replied, smiling with amusement. “Like I said, it was entertaining.” 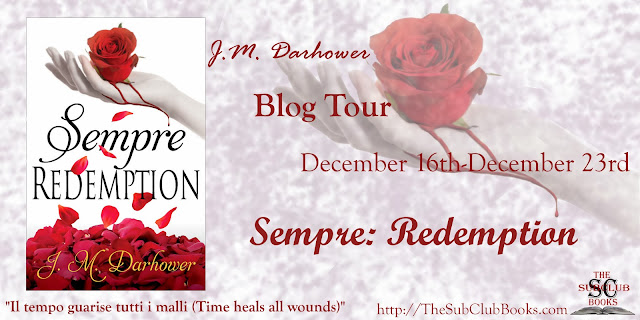 I don't know why I thought this book was going to be rainbows and unicorns and nothing but happiness but nope it sure was not.

This story is so much more than a love story. It is about the angst, the drama and redemption of one's self.  It is the journey of Corrado, Vincent and Carmine and Haven.
In the beginning I had a smile from ear to ear with the love that oozes out of Carmine and Haven and then at about 12 % my heart breaks when Carmine has to live with his choices and sacrifices he made to save Haven.

A life away from all of this bullshit, where you can just be Haven. Go be you and not what people tried to make you.  You have to go show those motherfuckers what they've been missing be not knowing you. Show them they can't hold my girl down.

Then the next 60% of the book is them apart.

I know, I know the title is about redemption but Ugh! my heart could barely take this.  However, as much it gutted me it was also necessary as the two of them needed to grow on their own as individuals to give into how deep their connection is. 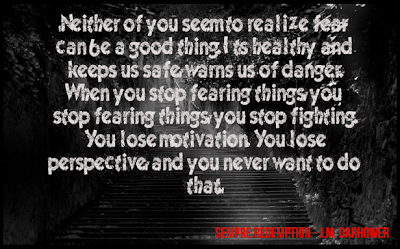 During this separation we get to see the growth of Haven. 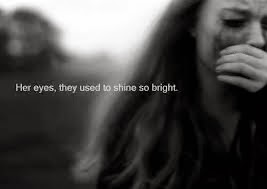 Where we also get to see the destruction of Carmine and the behind the scenes of his dangerous world.

With the truth comes consequences and more sacrifices. Vincent and Corrado risk everything to make things right the only way they know how. But we these choices it finally brings Haven back home where she belongs. 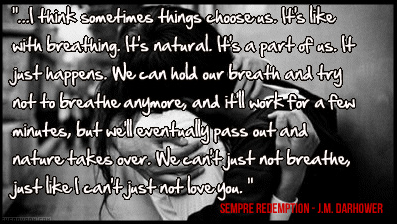 This story is such a beautiful journey from beginning to end even though J.M. Darhower may have ripped out my heart for a part of it.

J.M Darhower is a genius capturing the beauty of rightness in a ugly world of wrong.