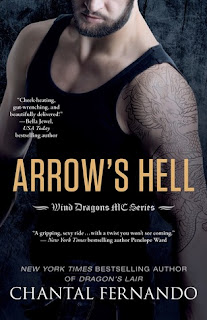 Being the younger sister of a Wind Dragons MC member isn’t as great as you’d think it would be.

I can’t escape the details of my brother’s exploits.
No one tells me anything.
Men who know who I am tend to stay away from me.

And worst of all:
The members of the MC are off-limits.

When Arrow catches my eye, I make it my mission to make him happy again.

When I fall head over heels in love with him, I just hope he will be there to catch me.
And that my brother doesn’t kill him.

Poor Arrow.  He broke my heart at the end of Dragon's Lair that I was hoping that he would get his well deserved MC HEA.  From the moment Arrow saw a pic of Anna he was hooked.

But Anna is the precious little sister of Rake/Adam which means she's off limits.  This however doesn't stop Anna from crushing on bad ass Arrow and all his grumpy ways. 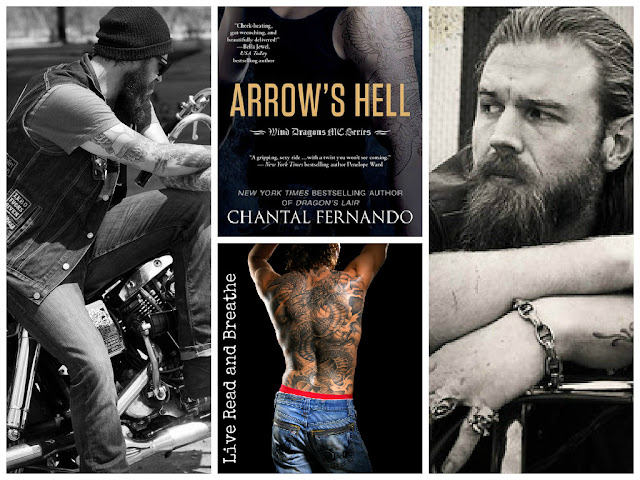 Arrow now has demons losing his last love and the choices and repercussions after that.  It's easier to drown his sorrows then deal with the reality.  Which is a life where he doesn't think he deserves any happiness when Mary is gone.

"I think you're really something, Anna. But people I care about get hurt.  If you're smart, you will hide what I can so easily see in your eyes because it makes me tempted to take what you're offering."

Arrow and Anna have a song and dance schtick for awhile then Arrow finally takes what he wants and damn the repercussions.

"I'm not used to having to explain myself, Anna, and I don't fuckin' like having to do it now.  You either have faith in me and trust me, or you don't."

Even though Anna is getting used to this MC world she still wants to be Arrow's equal.  That doesn't mean that's going to happen with any ease. Since the MC world is different than hers.

Her family had wanted more for her even though they are in the MC world and have brought her in it.  But they can't have their cake and eat it too where Anna's heart is concerned.

"You think I'd choose some overbearing criminal if I had the choice?  You're it for me, whether I like it or not."

A few hoops and some inner demon slaying later and Arrow collects his prize.

Anna was supposed to be feisty and sexy but at times she came across more bitchy then old lady.  As well as when the truth comes out Anna let me down a bit.  Sure the news was shocking. Yes. But if she has Arrow's back then I wanted her to have it, instead of woe is me and waiver.  Do I think she deserved time to digest this news. Yes. But I wanted her to get her head out of her ass way sooner.  If Tracker didn't go fetch her I don't know if she ever would have made it on her own in time.

Now Janet was quite the bitch/shit disturber.  Janet caused all kinds of trouble but I found her storyline just petered out without completion.  Hopefully in the other books this story line will get completed if not then I felt like it needed a bit more resolving.

Did I like this story ? Yes.  Was it more MC like than Dragon's Lair? Yes.  Was it enough to my MC standards? Not yet.  This series has potential and it seems it's getting better and better.  From the beginning Tracker has been my favorite so I can't wait for his story.  Fingers crossed it meets more of my bad ass, dark, edgy, alpha MC ways.

Posted by Live Read and Breathe at 21:53