Yours All Along (Loving on the Edge #7.5) by Roni Loren ~ #bookreview #MM @BerkleyRomance @SignetEclipse #releaseday 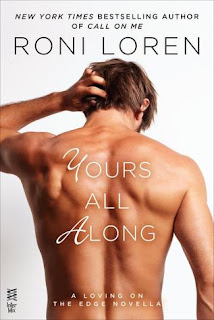 The new Loving on the Edge romance from the New York Times bestselling author of Nothing Between Us turns on the heat between two men who wonder how much they’re willing to risk in the name of love.

Four years after an accident tore their friendship apart, Hunter and Devon are living separate lives. Hunter is now the all-America hero—a congressman’s son and a pro pitcher in Houston preparing to marry his beauty-queen girlfriend. Devon is in Dallas running a new restaurant.

But when Hunter unexpectedly shows up in Devon’s bar, Devon can’t turn him away. Damn it if the man isn’t still gorgeous. But engaged? Hell no. All he’s doing for Devon is bringing back memories of their college-roommate days, and the night their relationship went too far. Turns out Hunter has never forgotten it either.

Now Devon can’t help but be drawn in all over again by the only guy who’s ever gotten close enough to break his heart. Maybe one more night together would be enough for both of them to finally move on. Or maybe one night will change everything…

Source: eARC for Honest Review Courtesy of Intermix | Penguin Group
Genre: MM Contemporary Erotica Romance Novella
Part 7.5 in an ongoing series but can be read as a standalone

My Yours All Along Review ...

What do we get when we have an asshole dad, a closet, a long lost love and a lie?  What we get is a poor torn, confused and heart sad Hunter.

Hunter has always lived the life he was supposed to live.  It was easier to do this then be true to himself.  Only once in his life did he follow his heart but when reality set back in, he went back to what was wanted of him.

Now years later he's living his dream and just about to be married.  Or is he?  His soon to be wife is a bit off her rocker and is playing mental games with Hunter, which ultimately pushes him back to his past.

He wasn't sure if he should re-open that door but how could he not at least see Devon now that they are in the same city.

Devon has always loved his best friend. Probably more than he ever should have.  So, when Hunter disappears from his life, he was angry.  But that doesn't mean Hunter was forgotten.  The last thing he ever expected was to see Hunter again.  So when Hunter's at his work place and drunk he doesn't know what to do with him.

Hunter has been pushed to his limit, and now that he has seen Devon again he knows what he must do.  Finally he makes the choice for himself and no one else, consequences to hell with them-if he can finally be truly happy.  And Devon is what makes him happy. 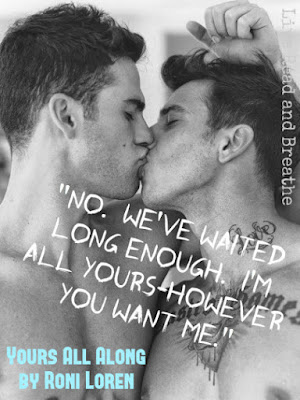 I truly love Roni Loren's writing and she did not disappoint with this little story.  It had heart and steam.  I loved Hunter and Devon together.  Yes this is part of a series but definitely can be read as a standalone or a pre-cursor to Call on Me book #8.   Because this story was a novella I ended up wanting a bit more from the story and Hunter and Devon.  I still loved it but found it to short where I could have gotten totally lost with these two.  Just as we are completely hooked the story ends to soon.

4 True to yourself Thumbs up!