Over the Top by Rebecca Zanetti ~ Feature Stop #excerpt @entangledpub 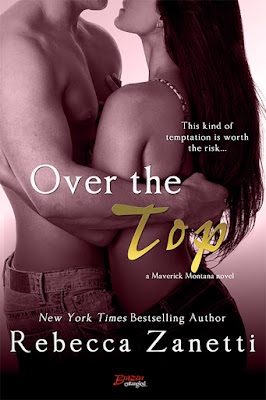 Over the Top by Rebecca Zanetti

Dawn Freeze had a huge crush on Hawk Rain for years, and the entire town knows it. It's understandable―the man is total hotness. That tall, lean body. Intense dark eyes. And always one foot out the door. Now he's on leave for exactly one week. And this time, he's made it crystal clear that he only wants one thing. Her.

Hawk's been fighting his attraction to Dawn for as long as he can remember. She's his best friend's little sister, and that means hands-off. Except now she's all grown up, and her sweet sexiness is exactly what he craves. But just as Hawk allows himself one mindblowingly intense night with Dawn, he learns that everyone he loves is in danger. Especially her.

And the only way to protect Dawn is to push her away...

Over the Top by Rebecca Zanetti “Yoo-hoo,” a cheery voice chirped as the kitchen door opened.
Hawk dropped Dawn to her feet and whirled around, reaching for the knife he’d forgotten to place at his hip. His gun was on the nightstand, damn it. His heart thundered, and the room narrowed into sharp focus as he moved to defend.
“Hawk,” Dawn hissed, shoving at his back. “Relax.” Her voice was low and throaty, and so sexy a shiver dashed down his torso. “It’s Mrs. Hudson.”
Ah, shit. Hawk blinked and took in the scene, forcing his body to relax. “Hi, Mrs. H.”
Mrs. Hudson, wearing a bright purple down jacket with “Hot Mama” bedazzled across the front, led Mrs. Poppins into the room.
Mrs. Poppins sighed. “Oh my.”
Mrs. Hudson whacked Mrs. P. with a humongous purse. “Look what you did, Bernie. Just look what you did.”
Hawk cleared his throat and fought the urge to shuffle his feet. Dawn stepped up next to him, her face a blazing scarlet.
Mrs. Hudson, oddly enough, looked more regretful than righteous or judgmental. “The cow, Dawnie. Come on. Surely you understood about the cow, sweetie.”
Dawn swallowed audibly. “Yes, ma’am.”
Hawk frowned, turning from Mrs. Hudson to Dawn to Mrs. Poppins. “Is there a problem with the herd, ladies?”
Mrs. Poppins coughed. “No, young man. It’s more of a milk issue and making it too readily available.”
Mrs. Hudson sighed. “Well, that’s two down. There are still three rules we could employ. I mean, he didn’t really rescue her last night, you know? You should’ve called him before she changed the tire.” Then, catching herself up short, she peered through bright red glasses at Hawk. “Don’t you have somewhere to be today, Hawk Rains?”
When she used that voice and gave him that look, he felt eight years old again. “Actually, I do.” He had to get back to work, which meant he had to stop thinking about sweet Dawn Freeze and concentrate.

Author Bio: Rebecca Zanetti is the author of over twenty-five dark paranormals, romantic suspense, and contemporary romances, and her books have appeared multiple times on the New York Times, USA Today, Amazon, Barnes and Noble, and iBooks bestseller lists.  She lives in the wilds of the Pacific Northwest with her own Alpha hero, two kids, a couple of dogs, a crazy cat…and a huge extended family.  She believes strongly in luck, karma, and working her butt off…and she thinks one of the best things about being an author, unlike the lawyer she used to be, is that she can let the crazy out.  Her current series are: The Dark Protectors, The Maverick Montana Cowboys, and the Sin Brothers series.  Upcoming series are: The Realm Enforcers and The Scorpius Syndrome.  Find Rebecca at:  www.rebeccazanetti.com