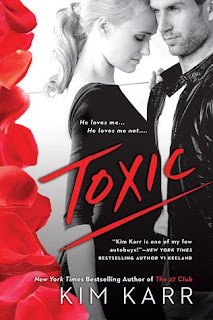 New York Times bestselling author Kim Karr turns up the heat in a smoking hot, emotionally compelling new novel that takes you into the world of Manhattan’s elite.

In Toxic, Jeremy McQueen, a sexy, intense, sometimes brooding entrepreneur goes after what he wants—the woman he left behind years ago. Phoebe St. Claire, a put together, in control socialite-turned-CEO has been drifting through life searching for something she thought she'd never find again—the right man to share her future.

Our passion was boundless. Our lust untamed. And our desire endless. He was the only man who ever made me feel alive. Then, I betrayed him.

When he reappeared, I didn’t question it. Trust rarely survives the wrecking ball, so when he let me in back in—I didn’t hesitate.

Maybe I should have.

What began as a bid to save my family business, turned into a second chance at love. It felt so romantic. Working together, side by side, with the man I loved. My dream come true.

Nothing is as good as it seems.

We had our issues, but then again, every couple does. It wasn’t jealousy, or our too-hot sex life that I should have been worried about.

It was his darkside.

I never saw the end coming, until it slammed me in the face. The question is—did he?

Was revenge his plan all along?

Sometimes you have to wonder if your life is too good to be true.
Is it real or just an illusion?
Does the man lying beside you really love you like he says he does?
If the answer is yes, you’re meant to live happily ever after.
If the answer is no, you’re living my life, and nothing will ever be the same.

What you do about it—that’s up to you.

Me, I’m in too deep and there’s no getting out.

So I should have known with the title Toxic that there was going to be some angst.  This book started off a bit slow for me.  It felt like forever until the main male character made an appearance and by that time Phoebe wasn't winning me over.  I did like this book but Phoebe's character had highs and lows for me.   As well as the inner dialogue at times was too dragged out which could have been the reason why I didn't love Phoebe.  I was too much into her head and it wasn't always endearing.


Phoebe was one of the Upper East Side NY elite but she has always wanted more.  Jeremy has always had passion for many things especially a dislike for the elite NY crowd.  On a chance event these two meet and right from the hop secrets are being kept.  I understood why Phoebe did it , but we all knew that was going to blow up in her face.

I was never any good at making decisions (No kidding!  This was one of Phoebe's biggest faults for me)
After young heart break Phoebe has still never recovered from Jeremy.  Now years later and these two reunite. 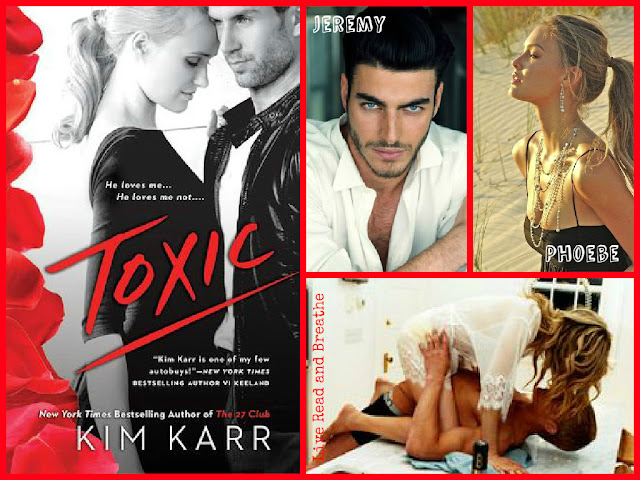 "Who are you?"  He wore a cocky grin.  "the guy that's going to sweep you off your feet."  I bit my lip. "What if I don't want to be swept off my feet?"  He shrugged nonchalantly.  "I can always toss you over my shoulder and carry you."


But many things are going against them:  1) Their jealousy 2) Phoebe's wishy washy ways 3) Phoebe's insecurities 4) Ex's  5) Scheming Bitches 6) Lies 7) Secrets 8) Assumptions 9) Miscommunications & 10) Lack of trust.   These two can give Gideon and Eva a run for their money in unhealthy relationships.


I knew I was playing fire, (So she does it anyways.  Good job Phoebe!)

That's why I let him stay, even though I knew he shouldn't (This girl. Gah! So frustrating.  Train wreck of a self fulfilling prophecy)

"We have to stop this poisonous reaction to things that aren't what they appear."  (You think?  *sarcasm*)

"Say what?  That you're right?  Or that I want you to trust in me.  To believe in me.  To not think the worst every time something presents itself in a compromising way."  (Ugh! These two!!! They could have had such an easier time if they talked & listened instead of assume & run. )


This relationship was a train wreck.  They were not necessary broken but effed up in the head when it came to logical thought.  They were both purely emotional and volatile.  This book is hard to review because of their angsty relationship, which will give you a visceral reaction good or bad.

Did I like the idea of the story?  Yes.  Did I like the hero?  Yes.  Did I like the heroine?  Meh! Not so much.  Did I understand why she made the choices she made? Yes, but it still wasn't enough for me to like her more.  Did I like all the side characters?  Absolutely. They help make the story otherwise it would have been all assumptions, miscommunications and running.  Which is my least favorite theme in the romance genre.    Do I recommend this book?  Yes and No.  If you like relationship angst, then hell yeah I recommend it because it is chalk full of it from beginning till end.  No, if you are not a fan of an insecure heroine who assumes, miscommunicate, then runs with a whole bunch of sex thrown in to emphasize the lack of communication between with these two.

I have to admit I wanted to like this so much more than I did as I'm a huge fan of Kim Karr.  But my lack of like for Phoebe more outweighed the strengths of this book.    Don't get me wrong I still quite enjoyed it and hung through all the angst I just didn't love it.

3 Too much angst but it's title is Toxic so I shouldn't have been surprised thumbs up!

Giveaway Provided by Sullivan and Partners, LLC
For US & Canada Only!!! Paperback Copy of Toxic by Kim Karr

Posted by Live Read and Breathe at 01:39