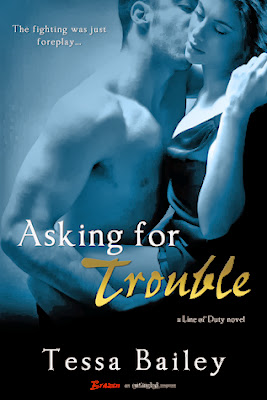 Asking for Trouble (Line of Duty #4)

by Tessa Bailey (Goodreads Author)
Brent Mason and Hayden Winstead can't stand each other. She plans exclusive parties for her rich familys charities. He's a rough and tumble cop who rigs explosives for a living. Could two people be any less suited for conversation? They think not and prefer to keep it that way.

Unfortunately, their two best friends are deeply, disgustingly in love. Forced together, the mutual attraction simmering beneath the surface of Brent and Hayden's non-relationship grows with every argument until it explodes into a scintillating night of mind-blowing sex. And it wont be the last, as far as Brent's concerned.

Hayden has a secret, though. Her father's company is relying on a merger to save them from financial ruin, and only Hayden's marriage to the CEOs wealthy son can secure the deal. If she's to protect her family, she'll have to forget Brent. And he has no intention of being forgotten.

I absolutely love this series.  Tessa has a knack for combining wit, angst and sexual chemistry.  I loved all of these dirty talking heroes but Brent may be my favorite. There is just something about him that stands out for me.

Brent and Hayden are forced to be cordial to one another because of their friendships with Story and Daniel which are from Officer Off Limits (Line of Duty #3).

With their own wrong assumptions of each other it puts their connection to one another on a rocky front.  So rocky you would assume they hate one another...

Or is it just foreplay.

To get each other out of their system they try to out play one another but they were not expecting the explosion of chemistry between them. 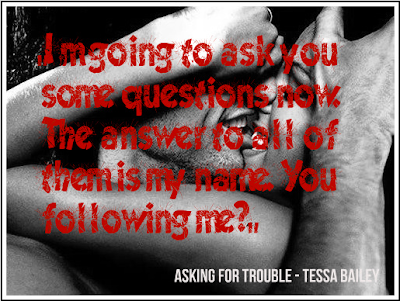 After truths come to the forefront feelings can't be denied. Even though they're the complete opposite to one another and are from two different worlds when its right, its right.