How I Met Your Father - #review 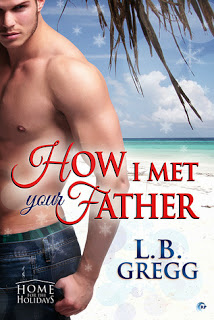 How I Met Your Father

by L.B. Gregg (Goodreads Author)
The man of your dreams could be sitting right next to you.

Former boy band member Justin Hayes isn’t looking for a man. He just wants a quiet, scandal-free Christmas at home in Chicago, out of the public eye. But his best friend and bandmate is subjecting everyone to his destination wedding, and Justin can’t dodge the “best man” bullet. All he has to do is get to the island on time, survive the reunion, and get Chuck to the altar with as little drama as possible. What could possibly go wrong?

Jack Bassinger’s own plans for a quiet Christmas have been dashed by the summons to his daughter’s hasty wedding with a man Jack has hardly met. On the bumpy flight to the island, he finds himself comforting a nervous—and extremely attractive—young man. One hasty sexual encounter in an airport bathroom later, they both feel much better. No one ever has to know, after all.

Now Justin and Jack must find a way to explore their attraction, despite the distractions of disapproving family members, unexpected announcements, an impromptu concert, and an island paradise that proves there’s no place like home.

20% of all proceeds from this title are donated to the Ali Forney Center in New York, whose mission “is to protect lesbian, gay, bisexual, transgender, questioning (LGBTQ) youth from the harm of homelessness, and to support them in becoming safe and independent as they move from adolescence to adulthood.” To learn more about this charity or to donate directly, please visit http://www.aliforneycenter.org/.

I originally stumbled across L.B. Gregg with her Men of Smithfield series which I absolutely adored so I jumped at the chance to read this book.

Justin Hayes has lived in the spotlight for too long and has a hard time being himself with so many skeletons in the closet.

Going to his best friend's wedding changes his world once he feels like he is going to crash and is saved my an unlikely neighbor who sees him for him. After arriving safely to his destination and a airport quickie. Justin feels all is well until his new savior crashes into his current reality being his best friend's future father-in-law.

Jack lives his life in an honest way but has lonely moments until he meets a cute young man he can't help but save but luckily for him reality brings him back to him.

Jack and Justin can't deny their connection even though it could be considered somewhat taboo but a meeting and sparks equates taking a chance. 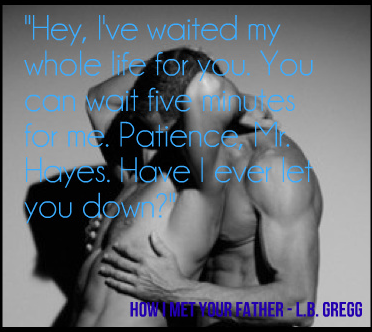 This is a quick novella with chemistry, heart, banter, drama and fun.  L.B always has me hooked with her characters and you are rooting for them the whole way through.

4 Coming Out Thumbs Up!