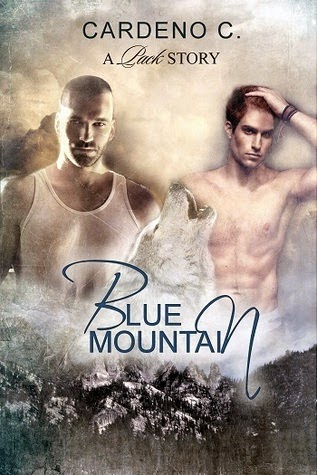 Exiled by his pack as a teen, Omega wolf Simon Moorehead learns to bury his gentle nature in the interest of survival. When a hulking, rough-faced Alpha catches Simon on pack territory, he tries to escape what he’s sure will be imminent death. But instead of killing him, the Alpha takes Simon home.

A man of action, Mitch Grant uproots his life to support his brother in leading the Blue Mountain pack. Mitch lives on the periphery, quietly protecting everyone, but always alone. A mate is a dream come true for Mitch, and he won’t let little things like Simon’s rejections, attacks, and insults get in their way. With patience, seduction, and genuine care, Mitch will ride out the storm while Simon slays his own ghosts and Mitch’s loneliness.

Another great paranormal love story by Cardeno C.  In this new series we have the blue mountain pack where the pack is led by the Alpha Frederick and helped with his twin brother and other Alpha Mitch.  Here we find out that not all Alphas find their mate, because not all Alphas are able to deal with the responsibilites of the pack and their mate.  But Mitch and Frederick have always known they were destined to have mates.  More often than not Omegas and Alphas are mated but it is not often you find a male Omega.

So when the pack stumbles across Simon on their territory and let the Alphas know that there is an unknown lone omega wolf on their mountain,  for the first time Mitch gets hope that his mate has been found.   Finding your mate doesn't always mean its going to be easy, especially when you mate is scared of his own skin and alphas in general.   But Mitch doesn't give up easily so he has to give Simon time to trust him.

Even though Simon's natural Omega instincts come to life around Mitch he fights it for a long time as he doesn't trust any alpha.  Mitch has to be patient with Simon but the reward is worth it for this mated duo.

Mitch the natural alpha wins my heart especially how he takes care of his mate Simob.  Once again Cardeno C. has written a very lovely story about true love.  So far I have loved every single story of Cardeno C.  They are quick to read and jam packed with emotion and heart.