Blurb:
Cynthiana, beautiful, intelligent, and by all appearances, a spoiled socialite, finds herself as chair of the Inner City Youth League Charity Gala.  Her Co-Chair, Roberto Luque, is Major League Baseball’s newest playboy from the Domincan Republic.  Far from being in the League of men her parents expect her to choose from, which is just fine with her since she has sworn off playboys.  But, as they work together she discovers his devotion to the inner city children and wonders if there is more to him than his playboy reputation.  Will she break her no playboy rule long enough to find out?
Roberto fought his way into the Majors.  Now, a successful pitcher for the Texas Rangers, he is living the life he always dreamed of.  Until he faces off with a bad-tempered, blue-eyed, red head that is not his type.  So, why is he drawn to her?  The Charity Gala gives him a chance to find out.  What he finds beneath that socialite veneer captivates him, heart and soul.
When her powerful father threatens to tear them apart, destroying not only their love, but also Roberto’s hard won career, will he be willing to give it all up for love? 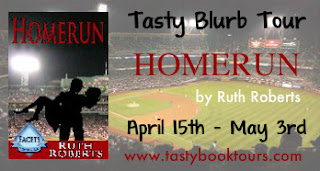 Author Bio:
Ruth Roberts has worked in public relations for fifteen years.  She lives in Texas with her very own romantic hero of eighteen years, their teenage daughter and their dog, Kimi.  Her hobbies are reading romance novels and writing them.  Her family says she is addicted to books, in her opinion that’s not a bad addiction to have.  You can find her on Facebook or on the web at RuthRobertsRomance.com. You can also email her at ruthrobertsromance@yahoo.com.  She loves hearing from fans.

Posted by Live Read and Breathe at 18:02