The Girl in 6E 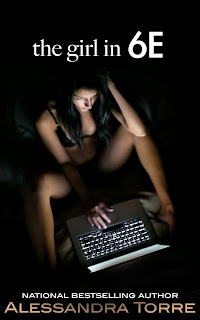 I screw men for money. Not literally, think phone sex operator with a 15 megapixel web cam thrown in. They tell me their deepest, darkest fantasies while paying me $6.99 a minute.

What would possess me to engage in such a business? Throw in a tortoured past, 24/7 murderous thoughts, and a desire to keep the innocent people of my small town safe.

I was contained, out of the way, sexcamming my way to utter obscurity until HE came along. A twisted client armed with a targets name. Annie. And in that name, everything changed.
Warning: This book contains explicit sexual references, and should not be read by anyone under the age of 18.

“Something happened, and I need advice.” I grip the phone tightly and wait for the psychiatrist’s response.

“No - nothing about that.  It’s Jeremy…you know the guy who-”

“You’ve had one human interaction in three years, I know who you’re talking about.  What happened?”

“He left me a note.  Outside.  With my package.”  I read him the note, trying not to add inflections that probably don’t exist.  When I finish there is silence, silence that stretches out so long that I find myself fidgeting.

“What do you want from me, DeAnna?”

“I want you to tell me what to do!  I don’t know how to handle this shit.”

“What was it like when you were with him?”

I stand, pacing the expanse between my two bedrooms.  Crossing the thresholds feels like moving between my two selves – sex kitten to lonely woman.  JessReilly19 to scheming murderess.  I pushed against his hard chest and then he was there, in my mouth, his tongue pressed gently against mine, and my own traitorous mouth responded, my heart rate increased, my hands moved of their own accord, to his strong arms. Shoving the blade of the box cutters deep into his skin, the blood bursting from the movement, spraying gently upon my hand.  I tasted him, greedy for everything, my hands roamed everywhere, grabbed at his shirt, hastily undoing the buttons.  If he came back, if he came inside, I could be more prepared, could succeed in my quest for death.

“What was it like when you were with him?  How did you feel?”

“In what way?”  Derek’s voice is so sensual, so soothing, so male.  I make a decision, moving to my pink bed, and lay back on the sheets that smell of lube and latex.

Alessandra Torre is an exciting new author who astonished the publishing world with the success of her first novel, Blindfolded Innocence. Initially self-published, the intriguing romance and erotica title quickly rose to the top of the charts on Kindle and Amazon and attracted the interest of major publishing houses. Currently available on Kindle, iBookstore and Nook, Blindfolded Innocence will be available in print in 30 different countries through Harlequin Publishing in June 2013.
Torre’s captivating story about a young intern’s sexual awakening has won praise and rave reviews from numerous critics, bloggers and book reviewers, including the acclaimed Dr. Laura Berman. In her recent article “35 to Read After 50″ in Everyday Health, Dr. Berman recommended Blindfolded as a must-read for book enthusiasts searching for a new fix after Fifty Shades of Grey. The book has also received high marks from readers on Goodreads and other literary web sites where fans frequently remark they can’t wait for a Blindfolded sequel!
Momentarily stunned by the book’s rapid success and loyal following, Torre is now releasing ‘The Girl in 6E’, and erotic thriller, as well as working on a sequel to Blindfolded. From her home near the tranquil warm waters of the Emerald Coast in Florida, she devotes several hours each day to various writing projects and interacting with her fans on Facebook, Twitter and Pinterest. Happily married to her “best friend” and with one son, she loves watching SEC football games, horseback riding, reading and watching movies.
Email her at alessandratorre4@gmail.com  * Like her on facebook  * Follow her on twitter  * Fan her at www.goodreads.com/AlessandraTorre  * Follow her on pinterest

Ok, so this review took me a few days because I needed to process all that went down in this book.  This book was a window into things I know nothing about.  It was dark, edgy, sad and yet still super hopeful.

It brings you into the world of "camming", anthrophobia (fear of human interaction) and cruorimania (obsession with murder)  and a whole schwack of sexual fetishes.

Throughout the whole book you are trying to figure out what is going on in the mind of DeAnna.

Throughout the book you also get a look into why DeAnna is they way she is. This part of the journey is so heartbreaking.  During this you also get a disturbing look into a world of sexual depravity that I was not familiar with at all.  In this process DeAnna discovers something and someone that can change her world in a heart beat.

On her new journey DeAnna discovers a lot of things that she was scared to face and with this she discovered saving Anna as well as her self and is left with hope at the end of her new rainbow.

I really did enjoy this book even though it is very dark. Alessandra has a gift at bringing you into the mind of the unknown and keeping you captivated of finding out what next.