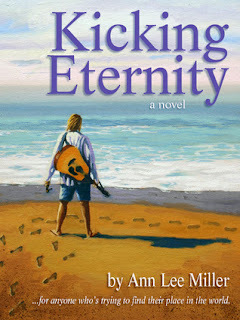 by Ann Lee Miller (Goodreads Author)
Stuck in sleepy New Smyrna Beach one last summer, Raine socks away her camp pay checks, worries about her druggy brother, and ignores trouble: Cal Koomer. She’s a plane ticket away from teaching orphans in Africa, and not even Cal’s surfer six-pack and the chinks she spies in his rebel armor will derail her.
The artist in Cal begs to paint Raine’s ivory skin, high cheek bones, and internal sparklers behind her eyes, but falling for her would caterwaul him into his parents’ life. No thanks. The girl was self-righteous waiting to happen. Mom served sanctimony like vegetables, three servings a day, and he had a gut full.
Rec Director Drew taunts her with “Rainey” and calls her an enabler. He is so infernally there like a horsefly—till he buzzes back to his ex.
Raine’s brother tweaks. Her dream of Africa dies small deaths. Will she figure out what to fight for and what to free before it’s too late?
For anyone who’s ever wrestled with her dreams.
Synopsis from Goodreads

From the beginning I was hooked on this book and it's characters.  Drew would be a great nomination for Book Boyfriend Monday's because of his perserverance and charm.  He just sticks around doing his thing even though he gets shut down sometimes!

Raine is working at a summer camp trying to save money to follow her dream and go to Africa.  At the beginning I thought that she would just be a typical "goody goody" girl but I was pleasanlty surpirsed with how her character developed. There is a lot more going on than meets the eye.  She deals with the attention from Drew, a guy stuck in rut still pinning away for his exgirlfriend and Cal, who comes from a "perfect" Christian family but doesn't know what he wants in life.  Add the addition of Raine's drug addicted brother and you have a great plot!

Raine feels and attraction for both guys, but feels like Cal will take her down a bad path because he doesn't know what he wants in life but she can't help but feel attraction to him.  As for her attraction to Drew, she feels safe with him but wonders if he will ever get over his ex girlfriend.  It is quite the little love triangle.

I really ejoyed the complexity of many of the situations that these characters got into and how there was actually learning and tough choices that every character had to go through.  I appreciated how everything didn't just "work out" for the characters, they actually had to go through pain and make difficult choices to find out where they should be.

Overall this is a wonderful book.  It is very clean and has a good postivie message.  The story kept you guessing and also made you reflect on how we make choices in our own lives.