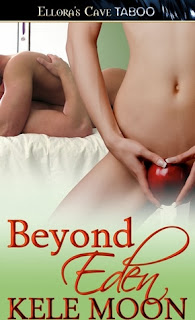 Tall, dark and handsome Danny Carlow has always gotten whatever he wants except for the two he wants more than anything-his best friends, lovers Paul and Eve. Determined, he waits like a snake in the grass, poised for the right moment to offer them a temptation too delicious to resist.

Artist Eve Everton makes the painful decision to leave her true love Paul for the siren call of New York City. Ten years later, with her life in shambles, she returns. When Paul's waiting arms aren't available, Eve falls for Danny's charm and finds herself a willing accomplice in the dangerous games Danny plays.

Former college football star Paul Mattling is now a successful attorney with a bright future ahead of him. But behind those brilliant blue eyes are secret desires for a taste of the forbidden. Will he play it safe or give in to Danny and Eve and bite the apple?

So on my merry way I decided to finally read this ménage book as soon as I started reading I was like oh holly hell that heated up fast, then I was like I saw that coming but I really didn't see that coming then I got quite flushed then the part of beauty happened.

This was about three truly broken individuals that together fit like the most perfect puzzle. Without one they couldn't be whole.

"Use artist eyes and look for lust and desire, not horror or pain. The devil was the most beautiful angel. Remember that and I think we'll all be fine. Perfect mates complement each other. It makes no difference if it's in heaven or hell, as long as they are together. You are a perfect mate to Paul and me, Evie Girl. I think we always knew that. It was the reason the three of us became friends before we were old enough to understand anything other than recognizing another part of ourselves in someone else."

For Paul, pain is his gift and his curse.  He was giving up his everything for the truest pain and a loyal promise or so he thought. It wasn't until losing Danny and Evie that he finally received the worst pain he could ever receive.

For Danny and Evie they didn't know their own inner demons until Paul but there inner kinks are what brought the beauty of the three of them together.

4 Broken Yet Beautiful Thumbs Up!

Lauren
Posted by Live Read and Breathe at 14:00