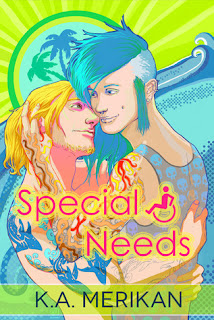 Liam slept with his boss. Again. And lost his job because of it. Again. Set on changing his ways and tired of sleeping in his car, he applies for a job as a live-in caretaker, even though he has no experience in it whatsoever. He has a lot of practice in lying his way out of any situation though. Only problem is, his new boss - wheelchair bound owner of a sex hotel - is gay, cute, funny and oh, so fuckable! There is only one logical solution to Liam’s dilemma - pretending he’s straight. Brilliant!

When Ryan inherited his aunt’s B&B, he thought he’d hit the jackpot by changing it into a fetish sex hotel. Things didn’t go as planned though, all of his marketing efforts seem to fail, and the debt is mounting up. Being a wheelchair user doesn’t help in actively promoting his hotel, but his luck starts to change when he hires a new caretaker. Liam is open-minded, helpful and caring. All that Ryan needs from a caretaker to kickstart his business, but things would all be a lot simpler if he didn’t start crushing on his new employee. And even if, in some other dimension, Liam did return his feelings, how long can Ryan keep his fetish a secret?

The web of lies they weave around each other is more bondage than any of them enjoy.

“Special Needs” is book one of a two part series.

Ok K.A. Merikan have done it again with a crazy as shit but still suck you in M/M love story.

Liam is a tattooed surfer/chef who's hard pressed for a job as he has a nasty habit of sleeping with his bosses then getting fired. He's so desperate he lies about his sexuality to get the job, but the closer he gets to Ryan the harder it is to stay away.

With K.A. Merikan you know you are in a world of kink and for Ryan the poor virgin has a whole bunch of kink locked up in his head that only Liam has the key for. And together they play out their fantasies that may be on the wrong side to some but it works for these two.

But unfortunately Liam and Ryan's relationship has been started with lies and secrets from the start until the biggest secret of all comes out causing Liam to question everything and then we are left with a friggin' cliffhanger till fall to find out what happens. Will there be forgiveness or will this secret be too much?