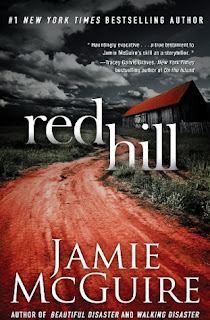 Red Hill
by Jamie McGuire
When the world ends, can love survive?

For Scarlet, raising her two daughters alone makes fighting for tomorrow an everyday battle. Nathan has a wife, but can’t remember what it’s like to be in love; only his young daughter Zoe makes coming home worthwhile. Miranda’s biggest concern is whether her new VW Bug is big enough to carry her sister and their boyfriends on a weekend escape from college finals.

When reports of a widespread, deadly “outbreak” begin to surface, these ordinary people face extraordinary circumstances and suddenly their fates are intertwined. Recognizing they can’t outrun the danger, Scarlet, Nathan, and Miranda desperately seek shelter at the same secluded ranch, Red Hill. Emotions run high while old and new relationships are tested in the face of a terrifying enemy—an enemy who no longer remembers what it’s like to be human.

Set against the backdrop of a brilliantly realized apocalyptic world, love somehow finds a way to survive. But what happens when the one you’d die for becomes the one who could destroy you?

Red Hill grabs you from page one and doesn’t let go until its stunning conclusion. This is #1 New York Times bestselling author Jamie McGuire at her unforgettable best.

So this is not my normal genre but Jamie wrote it so I had to read it and I'm so glad I did.

In the beginning with multiple POV's I thought it was a bit redundant but slowly it all came together and had me hooked.

There were many tears shed and holy shit moments. Which I can't get into without ruining the book.

But what I can say is it is a book about hope and starting new when you literally have nothing. It's about love when you least expect it. It's about so much loss and trying to survive from it. It's about never giving up. This book is both beautiful and profound.

You get to see the events through here different characters and how they handle the end of world.

Scarlet the tough as nails mom who never gives up and is strong not only physically but emotionally and mentally as well. She is put through so many scenarios that I have no idea how I would have handled them.

Nathan the devoted and loving father who only wants to save his daughter but is calm and level headed when shit hits the fan.

Miranda the daughter with a grudge because she's forced to be the strong one when she also needs to be taken care of which gets her in trouble when she starts to wander away from safe and secure.

Even though the book is through these three besides Scarlett and Nathan I think Skeeter and cooper may have been my faves.

If the end of the world zombie apocalypse book is not your normal thing give this a go I think it's worth the risk.