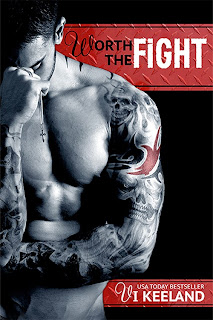 Title: Worth the Fight

Links to the book:

It didn’t matter that the ref called it a clean hit. Nico Hunter would never be the same.

Elle has a good life. A job she loves, a great apartment, and the guy she’s been dating for more than two years is a catch and a half.  But it’s boring…and she strives to keep it that way. Too many emotions are dangerous. Her own past is living proof of what can happen when you lose control.

Then Nico walks into Elle’s office and everything changes…for both of them. But what can the tattooed, hard-bodied MMA fighter and the beautiful and always steady attorney have in common? A lot more than they bargained for.

Vi Keeland is a native New Yorker with three children that occupy most of her free time, which she complains about often, but wouldn't change for the world. She is a bookworm and has been known to read her kindle at stop lights, while styling her hair, cleaning, walking, during sporting events, and frequently while pretending to work.  She is a boring attorney by day, and an exciting smut author by night!

To see other stops on the tour for reviews, guest posts, and excerpts click here or the tour button below. 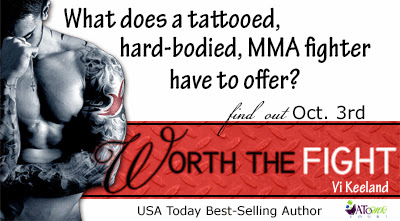 For Elle, she is a woman with her past held close to her without letting anyone in.  She copes with it by being busy at work and having a superficial relationship with a man that is a safe bet until she meets Nico who changes everything.

Nico has is own demons plaguing him in his every day life and it's making it difficult for him to move forward with his life. Once he meets Elle he finally finds a reason to let go.


"You mean you're seeing someone exclusively?" She emphasizes the word exclusively as if the concept was foreign to me.
"Not yet."
"Well what's stopping you?"
"She is."
"Why don't you just use your usual seek and conquer charm that you always do? Lily is only half kidding with her comment.
"Because this one you have to earn."
Lily shakes her head and mumbles something I can't hear as she walks away laughing.
"Shit, bro, you're screwed. The one's you have to earn own you."

The two of them of great chemistry and don't have all the relationship insecurities instead they have to deal with their own issues in order to be happy with one another.

At times their demons take the lead but in end their relationship is worth the fight!.

"...You're it for me, Babe. I didn't even know I was missing something until I found you, but now I don't know how I got through a day without what you've given me."

PURCHASE WORTH THE FIGHT VIA KINDLE