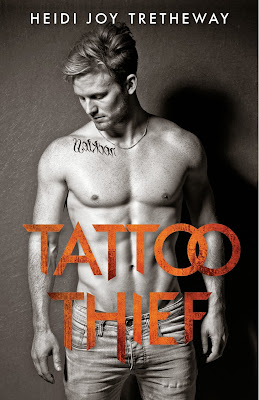 
22-year-old Beryl doesn't know why Gavin Slater trashed his penthouse, abandoned his dog and fled the country. But as his house sitter, she must pick up the pieces for the front man of the white-hot rock band Tattoo Thief.

When ultra-responsible Beryl confronts the reckless rock star, she wants to know more than just what to do with his mess. Why is he running? What’s he searching for? And is he responsible for the death of his muse?

New York newbie Beryl must find her footing in Gavin’s crazy world of the ultra-wealthy to discover her own direction and what can bring him back.

Steamy, sassy and tender, Tattoo Thief is a story of breaking from a comfort zone to find a second chance. 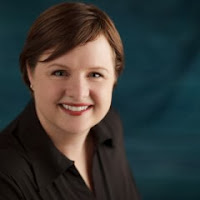 
Heidi Joy lives in Happy Valley off Sunnyside Road. She swears she did not make that up.

Heidi’s obsessed with storytelling. Her career includes marketing, journalism, and a delicious few years as a food columnist. Media passes took her backstage with several rock bands, where she learned that sometimes a wardrobe malfunction is exactly what the rock star intends.

You’ll most often find Heidi Joy with her husband and two small kids cooking, fishing, exploring the Northwest, and building epic forts in their living room.

She loves to hear from readers via messages at facebook.com/author.heidi.
a Rafflecopter giveaway
Links: 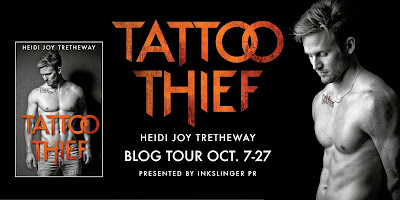 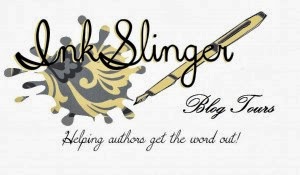 ORIGINAL SONG
Music plays a key role in the book Tattoo Thief, which features a band of the same name. Songs influence major events in the book, so the author commissioned singer-songwriter Thomas Hallett to compose and record one of Tattoo Thief’s songs, “Wilderness.”

In the book, Gavin records this song for Beryl to share how his wilderness trip has transformed him. He records it simply on a video in his hotel room and it's just his voice and guitar—a total departure from the band's typical driving rock. The lyrics tell Beryl he's rediscovered his inspiration after the death of his muse.

PLAYLIST
Tattoo Thief is about a reckless rocker, but its playlist isn’t just rock. Each song is connected to key scenes in the book as Gavin and Beryl’s relationship grows.

Tom Petty and the Heartbreakers: Learning to Fly
Beryl is stuck. Stuck in her sleepy hometown. Stuck managing a coffee shop and waiting tables until her "uncle" Dan—her late father's best friend—offers her an opportunity to move to New York. This song hails from Uncle Dan's generation and speaks to Beryl spreading her wings for the first time.

Lyrics capture a New York that dazzles and terrifies Beryl. I love how different the musical style is from the rest of Tattoo Thief's playlist. "These streets will make you feel brand new/ the lights will inspire you," connects with Beryl's budding willingness to try new things and reinvent herself.

Coldplay: Viva La Vida
Gavin Slater's was on top of the world: the front man for the rock band Tattoo Thief was profiled in Spin magazine for being one of just ten artists to reach the top of the Billboard charts twice in twelve months. His fall from this peak into a deep, self-destructive jag is the heart of the mystery for Beryl—why did he trash his apartment and flee?

Mirah: Words Cannot Describe
(About 25 seconds of silence precede the beginning of the song.)
The lightness and sweetness of this song captures Beryl's initial crush on Gavin. With each photo, interview and video she sees, Beryl is drawn more strongly to him. As his house sitter, living at his house and experiencing his life, she’s even getting a little obsessed. "I'm wishin' on a star to be with you."

Dave Matthews Band: Grace is Gone
Gavin's run away, tormented by blame and shame after the death of his muse. He tries drowning his sorrows, but even self-imposed exile can’t escape the crushing guilt.

The Wanted*: Glad You Came
The best way to get over one man is to get under another, or so says Stella, Beryl's best friend. Plunge yourself into a New York club scene with spinning lights, grinding guys and Thighs of Steel, a.k.a. Anthony. Beryl lets herself get lost in this moment.
*Tattoo Thief is based in part on The Wanted. I encountered the band on a trip to New York to research this book.

James Blunt: Stay the Night
Anthony's a sweetheart, and a date with him is near-perfect. When he asks Beryl to stay the night, she's willing … but the voice on the radio won’t let Beryl to deny her feelings.

The Pernice Brothers: The Weakest Shade of Blue
From Gavin’s pale blue eyes to the pale blue of a beryl aquamarine, this song is optimistic for the couple. "Could it be so wrong?" speaks to the possibility in this tenuous relationship between broken people.

Phillip Phillips: Home
Gavin needs an anchor, a reason to come home. But his home is haunted by the memories of his muse. "Don't pay no mind to the demons they fill you with fear." By making over his apartment, Beryl gives Gavin a lifeline. "If you get lost you can always be found."

Christina Perri: Bang Bang Bang
Peter is a destructive force and this is Beryl's revenge song. Karma's a bitch.

Mumford & Sons: I Will Wait
Beryl believes in Gavin’s ability to heal, and she gives him this assurance even when he pulls away. "You forgave and I won't forget," is especially significant because Gavin must prove he’s worth waiting for.

Toad the Wet Sprocket: Throw it All Away
This song is about throwing off "the lies that justify the pain, the guilt that weighs upon your soul, and throw it all away." It's time for Gavin to heal, to put down all the guilt he's carrying and come home.

Christina Perri: Distance
When there's finally no physical distance between Gavin and Beryl, doubts remain. “Now that he’s real, he’s not as simple and perfect as a dream,” Beryl says. From the song: “Call it anything but love. I will make sure to keep my distance.”

Jack Johnson: Better Together
“Love is the answer, at least for most of the questions of my heart.” The lightness of this song communicates a bond that’s finally true and tested. It’s freeing. Simply put, “it’s always better when we're together."

Phillip Phillips: Gone, Gone Gone
Through thick and thin, the people who love you will be there for you. "Your hope dangling by a string, I'll share in your suffering,” is a common theme for all of the relationships in Tattoo Thief. Gavin toasts friends that stick: “Those are the friends worth having, and the kind of friend I want to be.”

BONUS TRACKS:
Ed Sheeran: The A Team
The acoustic feel of this song and its melody inspired Gavin’s song “Wilderness.”

Hmmm. Well it had some of my favorite themes

What it didn't fully have was the complete connection between Beryl and Gavin.  And some of the dialogue felt awkward and superficial.

The premise was great by falling in love a far and coming together in person.  With this concept I wanted to believe their emotions more but that part was lost somewhere for me.

"Beryl, listen to me: 'Opportunity is not a lengthy visitor.' "

In the end it was still a sweet book about love and second chances.

PURCHASE TATTOO THIEF VIA KINDLE
Posted by Live Read and Breathe at 04:00