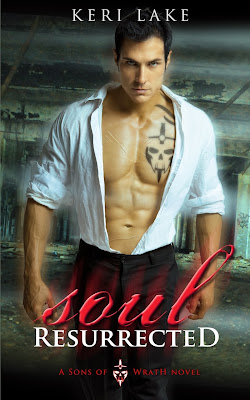 As Wrath’s fiercest son, Logan carries the scars of fifty years spent in the most dreaded prison of the underworld, for a sin he’d kill to keep secret. Enduring decades of gruesome torture has left Logan feared by and detached from others, until a female Alexi’s blood resurrects his soul from death and, with it, the pleasures he’s been denied for so long.
Plagued by shame of her own, Calla is drawn to the ruthless demon, Logan, whose insatiable craving for her touch rouses buried passions and, for once, leaves her feeling desired.
A dark and dangerous evil has been reawakened, however, and when Calla is drawn too close to its breeding grounds, Logan vows to summon the violence of Wrath in order to keep her safe. First, though, Calla must save him from a past riddled with deceit and corruption … but only if she can accept the chilling consequences of unearthing his vilest skeleton.

Keri Lake is a married mother of two living in Michigan.  She writes paranormal romance, urban fantasy and loves a good, tragic love story.  Though novels tend to be her focus, she also writes short stories and flash fiction whenever distraction manages to suck her in to the Land of Shiny Things.
When she isn’t toiling away on plots and protagonists, she enjoys reading, music and travel.  If she could create mystical powers for herself, she’d have the ability to flash to anywhere in the world.  And if she could flash to anywhere in the world at this very moment, she’d be staring at the ocean from her adirondack chair on the shores of North Carolina.

Some lives just weren’t worth the trouble of saving …

The dark room swallowed Logan, as he lay sprawled on his bed—just as he’d been left after ditching his date with death. A stomach-turning sensation of thickened skin and tingles swathed his body, closing in on him, phantom sensations crawling over his flesh that kept him awake. Every five minutes or so, he willed an arm or a leg to move. No go.
Shadows danced across the wall on the occasions that one of the Catatones guarding the mansion passed through the floodlight below his window. He focused on them only because his neck had been propped in that direction and he had no choice. Good thing, though. She had been assigned to watch over him and slept somewhere beyond his periphery, the reminder heating his blood every time her sleepy moan drifted across the room.
The fury could’ve split him right down the middle.
Her blood ran through him—pumping in his veins, feeding his heart, keeping him alive.
Calla’s.
The woman who’d gotten him stabbed with Demortis, the only element capable of taking down a demon, now swam through his body as the only element capable of saving him. Her blood. Pure. Probably the closest he’d ever come to being righteous.
The irony was enough to leave him scratching his own eyeballs out of his head—that is, if he could reach the damn things. Like a bitch slap from the gods, who probably sat around drinking beers over the shit, poking fun at him.
The side effect of returning from the dead?
Feeling like the fucking dead.
Logan tightened his lip, wishing he could kick his own ass for being so stupid. Not like he’d had to save her or anything. Hell, being a demon meant being the exception to human rules.
And being a son of Wrath meant never having to play by any species’ rules.
Yet for some reason, one lodged so deep inside his brain he couldn’t even begin to explain, he’d felt the need to intervene. Not so much for her sake, but because the little prick trying to rape her had taken a jab at the psychopath buried in Logan’s bones. Taunted him.
Then finally tripped his kill-switch.
Yeah, that’s what Logan told himself, anyway, because no other excuse could possibly justify why he couldn’t stir a single muscle in his body for anything having to do with her—Calla. The girl they’d picked up at some underground party, so high on Shine she’d have probably let every one of the brothers have a go at her if they’d been the ravaging bastardly types.
Lucky for her they weren’t.
“Should’ve walked away,” he muttered, his voice the only part of his body he could control.
A zing of pain shot through Logan’s feet, flexing them into an unnatural, paralyzed position. “Ah, shit!” Hadn’t his feet been numb just seconds ago?
Not even forcing his muscles to relax shook the sting away, one like a strike to the level of his bones, as if they shattered with impact.
He held his breath and clenched his teeth while the pain crept up his leg. “Motherfucker!” He spoke past gritted teeth, keeping his voice low to keep from rousing his babysitter, but damn, his back arched like one of those tetanus-infected bastards, his eyes squinting so hard they could’ve popped backward into his brain.
Black smoke curled behind his lids, and a deep laughter mocked him as the agony reached his spine. Trembling in the bed, Logan clamped his mouth shut and allowed the convulsions to run through him.
In silence.
He’d known pain—gut-turning, put-me-out-of-my-fucking-misery pain. Nothing compared to what wracked him at that moment, as if nightmares could invade the body and inflict injury. The burn, like molten lava oozing in his veins, seeped into his every cell, searing him from the inside. Sweat trickled down his temple at the same time as a chill burst deep inside his bones and swept through his limbs, leaving behind a wake of nausea.
That black smoke carried the familiar sensation he’d felt once or twice in his life—from the quick witted son of a bitch that brought the toughest demon males to their knees: absolute death. Stygius. The place in the underworld from where no soul ever returned.
With shallow panting breaths, he allowed the blackness worming its way into his mind to take over as something dark and wicked laid claim.
All Logan could do was let it take him.
Posted by Live Read and Breathe at 02:00