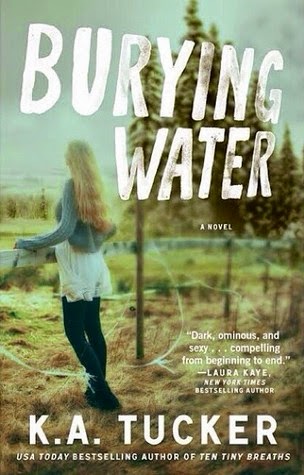 The top-selling, beloved indie author of Ten Tiny Breaths returns with a new romance about a young woman who loses her memory—and the man who knows that the only way to protect her is to stay away.

Left for dead in the fields of rural Oregon, a young woman defies all odds and survives—but she awakens with no idea who she is, or what happened to her. Refusing to answer to “Jane Doe” for another day, the woman renames herself “Water” for the tiny, hidden marking on her body—the only clue to her past. Taken in by old Ginny Fitzgerald, a crotchety but kind lady living on a nearby horse farm, Water slowly begins building a new life. But as she attempts to piece together the fleeting slivers of her memory, more questions emerge: Who is the next-door neighbor, quietly toiling under the hood of his Barracuda? Why won’t Ginny let him step foot on her property? And why does Water feel she recognizes him?

Twenty-four-year-old Jesse Welles doesn’t know how long it will be before Water gets her memory back. For her sake, Jesse hopes the answer is never. He knows that she’ll stay so much safer—and happier—that way. And that’s why, as hard as it is, he needs to keep his distance. Because getting too close could flood her with realities better left buried.

The trouble is, water always seems to find its way to the surface.

Wow! This was my first K.A. Tucker book

I know I know, I have heard so many good things about K.A. Tucker and finally I got to read her brilliance.  This book was a multiple POV with one POV being in the present while the other POV was in the past tying the whole story together.  It's also about two souls being meant to be intertwined  even though reality made it difficult, fate still kicked ass for these two.

I always have a hard time reading when cheating is the theme but with this even though it wasn't the morally correct decision you were able to understand why they made the decisions they did.  Jesse meets a stranger on the side of the road who changes his path in life with one random kiss.  He later re-meets this stranger only to get caught in a morally changed tangled web leading to a case of amnesia and a chance of starting over.

The whole time I was biting my fingernails to find out how it all played out.  I don't want to say too much about what happens in the book because I think it would would ruin the whole experience.  I think it was brilliantly written yet a bit long.  There were elements that I felt were drawn out too long and could have been shorter but all in all I did love it and I can NOT wait to read more from K.A. Tucker.