More Than Forever is book four in the More Than series and may be read as a standalone,
though it is recommended to read in series order.
Series reading order: More Than This (Book one) More Than Her (Book two) More Than Him (Book three)
-LUCY- There is a love so fierce it cannot be measured. A heart so strong it will never slow. There is a promise so sure it can never lie. He promised me that love forever. Even when it wasn't enough.
-CAMERON- Forever. Everlasting. Eternal. There is no measure of time. No sounds of the ticking of a clock. Just the rising and falling of the sun. And our own sense of forever.
But our forever isn't always.

I see her wobble on her feet before she slowly tumbles to the ground. Her knees give out first, then the rest of her. It feels like I should've gotten to her earlier, but seconds of panic took place before my mind kicked into gear. And the rest is a blur. Her friend's standing over us while I rest her head on my lap. "Lucy," I say. And it's the first time I've said her name out loud. It'd been over three weeks since I'd learned it. "What happened?" Logan asks her friend. "I don't know." She's as panicked as I am, if not worse. "Is she dehydrated?" Logan picks up what looks like an uneaten sandwich. "Is this hers? Has she eaten?" I don't know why it annoys me that Logan is asking all the right questions and all I can do is stare down at her. She's breathing, so I guess that's something. He drops down on his knees on the other side of her and pours water from his bottle into his hand, and then he runs it across her forehead and into her hairline. "Is she alright, mate?" Jake asks. He's new and has a weird accent but Logan seems to think he's cool so we keep him around. Logan does the water thing again, and this time her eyes slowly flutter open. And I release the breath I was holding. "It's okay," Logan says to her, "you just passed out." He's in her face now, and I want to punch him for being the first thing she sees when she comes to. I was here first; I was the one watching her when she fell. It should have been me.

"I hate that guy," Logan jerks his head toward Jake and a new kid. "The new kid? Dylan?" He nods. "He thinks he owns the school." "Really?" I glare over at them. "Apparently he kills it on the basketball court, but I dunno." I shrug. "He hasn't said two words to me. He seems quiet." "Those are the ones you have to worry about, Cam. The quiet broody assholes get all the girls. Better watch him around that new girl of yours." I play dumb. "What new girl?" "Shut up, asshole. You don't think I notice you watching her all the fucking time?" I lift my chin. "I think if there's an asshole in this entire school to watch out for, it's you." He laughs and adjusts his cap. "You don't need to worry about me. I'm not into stealing my friend's girls." He shoves his hand in his catcher's glove and smacks my arm with it. "Say the word. Claim her. I promise to stay away and I'll make sure she's untouchable to everyone else." "I'm not an asshole and she isn't property. I can't own her." "If that's what you want." He raises an eyebrow. "She's cute. In a couple years she'll be hot. Guys will be all over her. I'm just trying to help out." I think about what he's saying, and he makes a good point. Only he's wrong—she's hot now. "Fine. I claim her. She's mine." His smirk is instant. "You can't own someone, you pig. She isn't property." I laugh. "Fuck you." Jake struts over to us. "Ya reckon that new kid Dylan can hang out with us this arvo? He seems like a top bloke." Logan's gaze moves to me, confusion clear on his face. I shrug. He lets out a chuckle before gripping both of Jake's shoulders and shaking him gently. He looks him right in the eye, speaking slowly and clearly. "I have no idea what the fuck you just said."

Source: eARC for Honest Review from Author
Genre: NA Contemporary
Part 4 in a series and should be read in order to get the full effect of this amazing series

My More Than Forever Review ...

Once again Jay McLean has caused me to lose sleep. I thought I would just read a chapter or two then read the rest over the next few days, then all of a sudden it is 3am and I have to be up in four hours.  But it couldn't be helped, as with all her books once you pick it up you can't put them down.

Lucy has always been one of my favorites throughout the series, so I was ecstatic to get Luce and Cam's story.  And what a story it was, filled with so much love, with some loss, angst and heart ache thrown in.  As much as I didn't want the heartache it wouldn't have been that much of a story if it was just unicorns and rainbows in regards to their relationships.  In life, relationships take work and Luce and Cam have to figure out that the hard way.

As we know from the rest in the series is that Lucy is the firecracker, sex fiend book nerd, but what we get to learn is that she wasn't always that way.  Lucy was brought up that books were her salvation and memories of love and happiness.  She comes from a family of 7 children with 6 brothers and when heart break and loss happens, her family is about to fall apart leaving poor 15 year old Lucy to keep it together.  As Luce struggles to hold her family together an angel comes in to help her and give her the freedom to heal.  What she didn't expect from this angel was to fall in head over heels forever love with him.

They gave us all names beginning with L. Because L - it stands for love. And love is something we should be reminded of every day.

Cam probably has the most biggest beautiful heart and when he sees Lucy at her brother's baseball game he is instantly drawn to her and wants to help and save her.  Not knowing Lucy but only knowing that he wants to help starts to show up at her families house daily to help any way he can.  The more he helps, he gets immersed into their family and into Lucy.  Cam becomes the savior that this family needed to survive and move forward.

If heartbreak had a face, hers would be it.

Cam and Lucy have a perfect loving relationship throughout all of high school but as the older they get and the more life expectations gets put on them, it starts to take a toll on their relationship.  Things have always been easy for them so bends & curves are inevitable but how we deal with them are key.

As the bends keep happening more and more they start to lose a part of their togetherness and sluts start to hit the fan.  Let me tell you I wanted to kick Roxy in the baby maker at the same time I wanted to strangle Luce and Cam for NOT communicating.

As things start to boil over all seems to be lost until even more tragedy happens.  This much heartache can either break or make a relationship and for Luce and Cam this is the pivotal point.

God! Let's start with I LOVE THIS SERIES!!!! so much.  I also LOVED this book.  Cam and Luce's love is powerful and fateful.  As we are reading and get encapsulated in their story are hearts are lifted with the potty mouth of Luce to all the other antics of their amazing friends.  With light also comes dark so even though there are moments where we have light with these guys we also get the dark and sadness, but with this sadness also comes fate and things so big being meant to be. 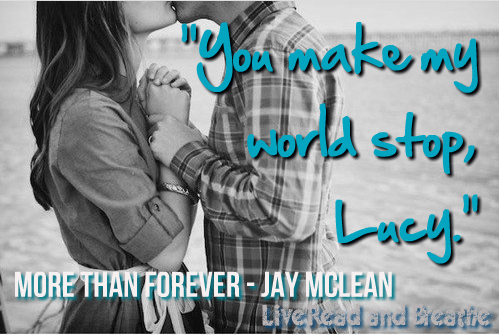 Some authors hit it out of the park on their debut books then either fail or sail with the next books.  With Jay McLean she not only sails but flourishes with her awesomeness to tell a beautiful heartfelt story.

Mid 2015 will feel like forever while waiting for the next book, More Than Enough.

5 More Than Amazing thumbs up!