SYNOPSIS
After losing her husband unexpectedly, Katrina Mayer decided to open Serpent’s Kiss. She wanted it to be a place where she and her fellow kinksters could play and socialize.


Where did you get your desire to write? I’ve always had stories in my head, but I didn’t begin writing my stories down until about eight years ago. Now, if I go more than a week or two without writing, the stories tend to take over most of my thought process. Writing them down gets them out of my head so I can think of other things.


What is the creative process like for you? My creative process is pretty basic. I get an idea for a story and I sit down and write. That’s it. I don’t plot out my stories and most of the time, I don’t even know what’s going to happen in the next scene until I write it. All my writing is done by the seat of my pants as it were.

Which are your favorite characters? Until I started writing my new Serpent’s Kiss series, I would have had to say Stephan and Brianna. They are still, and probably always will hold a special place in my heart; however, Katrina and Ryan have me itching to write their story. Too bad there are a couple of books that have to happen in-between first.

If you could change anything about any of your books, what would it be? I would like to go back and expand Chris and Elizabeth’s story. Behind Closed Doors was written in only three months. Most of my other books have taken me four to six months to write. I was under a deadline and while I still enjoy their story, I would have liked to have given them a bit more.

If you could change anything about any of your books, what would it be? I would like to go back and expand Chris and Elizabeth’s story. Behind Closed Doors was written in only three months. Most of my other books have taken me four to six months to write. I was under a deadline and while I still enjoy their story, I would have liked to have given them a bit more.

Where do you see taking Serpent's Kiss? How many books do you have planned and will there be any overlap with other characters we know and love? The way I am writing Serpent’s Kiss, the series will be open-ended, so it has the potential to go on indefinitely. I currently have five books planned where I know who both the hero and heroine will be. And yes, you may see a cameo appearance from Stephan and/or Brianna from my Finding Anna Series in one of the books.
Off book topic - what is your favorite food? What about your favorite place you have visited either as a writer or otherwise? My favorite food would have to be pizza. There are just so many ways to mix it up and make it different, yet the same. About ten years ago, my husband and I took a cruise that had a stop on the island of St. Thomas. I loved it. There is something about being near water that I love and the water there was so clear and blue. It was gorgeous. We both agreed that we’d like to go back one of these days.
What is the best and worst thing about being an author? The best thing, hands down, is getting to interact with readers. There is nothing like meeting someone who loves your characters as much as you do. As for the worst thing about being an author, that would probably be the challenge that is marketing. Most authors would love to spend all of their time writing and interacting with the characters in their head. Marketing, however, is a business and characters in your head who like to bug you to get busy writing don’t always understand that.
How has eBooks and self-publishing changed the way your write or has it? On a drive up to northern Ohio with another author, we had a conversation about this topic. When it comes down to it, people read differently on an eReader than they do with a physical book. One of the big differences seems to be that while most people don’t mind long chapters when reading a physical book, e-readers prefer smaller chapters that can be read while on the go. I’m lucky in that my natural writing style leans more toward shorter chapters.
Do you have any other series planned? Not at the moment. Right now, I’m concentrating on getting Serpent’s Kiss started, and then I’ll be finishing my Daniels Brothers Series. Once that’s wrapped up, I’ll begin looking at where to go from there.

AUTHOR
Sherri spent most of her childhood detesting English class. It was one of her least favorite subjects because she never seemed to fit into the standard mold. She wasn’t good at spelling, or following grammar rules, and outlines made her head spin. For that reason, Sherri never imagined becoming an author.

At the age of thirty, all of that changed. After getting frustrated with the direction a television show was taking two of its characters, Sherri decided to try her hand at writing an alternate ending, and give the characters their happily ever after. By the time the story finished, it was one of the top ten read stories on the site, and her readers were encouraging her to write more.
Six years later, Sherri is the author of six full-length novels, and one short story. Writing has become a creative outlet for Sherri that allows her to explore a wide range of emotions, while having fun taking her characters through all the twists and turns she can create. She is most well known for her Finding Anna series about a young woman rescued from being a sex slave by a wealthy Dominant. The third book in that series, Truth, released July 25, 2013.

Here we get a little window into the world of Serpent's Kiss.  This little prequel is like a mini taster of what is to come and I can not friggin' wait for the series. 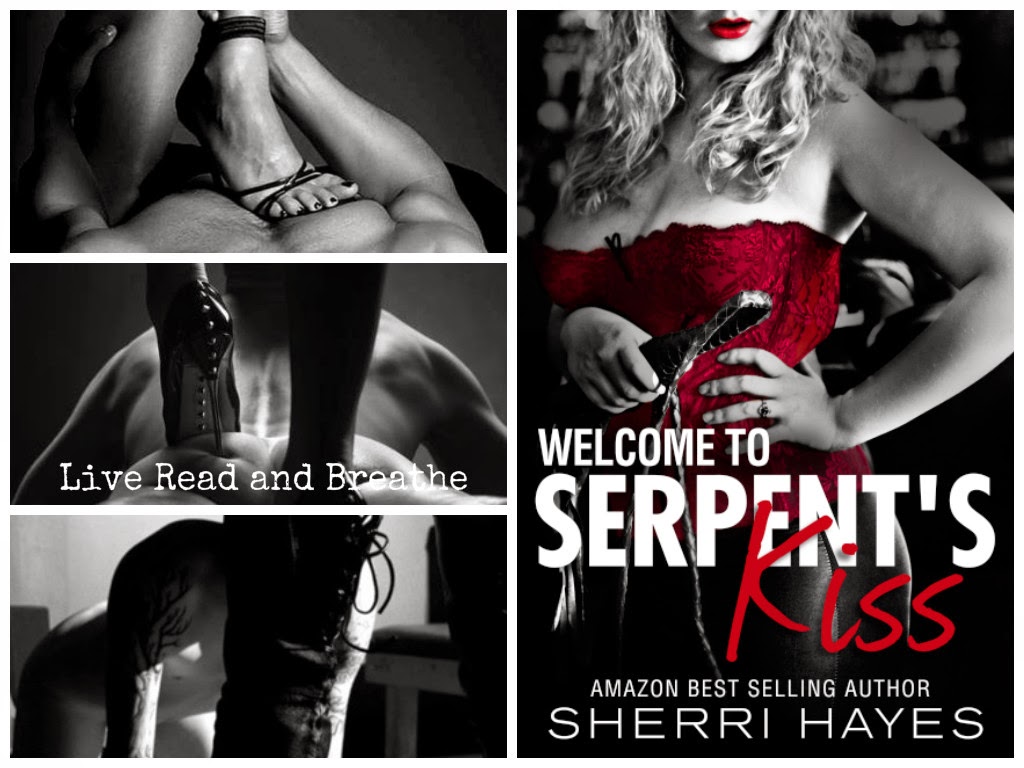 Katrina does what she can to help others and at the same time ignore her needs and wants.  She gives the bare minimum of herself but meets her Domme's needs.  However, even though she's meeting some of her basic needs she keeps everyone else at arms length including her sub who wants more from her.

What better way to ignore yourself then focus on what others need instead.  Katrina is now going to focus on her broken friend Beth and the newest submissive to the club Drew. Where we get to see more of them in Burning for her Kiss (Serpent's Kiss #1) which is coming out Feb. 12/15.

This was a great window into a potentially great series.  I can't wait to read more from this series and the fabulous Sherri Hayes.