Before I Fall (Falling #1) by Jessica Scott ~ #bookreview

Stay focused. Get a job. Save her father's life.

Beth Lamont knows far too much about the harsh realities of life her gilded classmates have only read about in class. She'll do whatever it takes to take care of her father, even if that means tutoring a guy like Noah - a guy who represents everything she hates about the war, soldiers and what the Army has done to her family.

Noah Warren doesn't know how to be a student. All he knows is war. But he's going to college now to fulfill a promise and he doesn't break his promises. Except he doesn't count on his tutor being drop dead gorgeous and distracting as hell. One look at Beth threatens to unravel the careful lies Noah has constructed around him.

My Before I Fall Review...

Jessica Scott has such a knack at writing military romances.  I have not served or been to war but I can't even imagine the consequences and aftermath of returning home.  I feel Jessica Scott does an unbelievable job at capturing the heartache and emotions of the devastation and situations that being at war leaves behind.

Beth Lamont is angry.  She's angry at the lack of care for her father.  After her father gets hurt on duty now that he's home the military has failed to continue to take care of him since he's not still enlisted or completely disabled.   Beth and her father have fallen into the cracks of the bureaucratic bullshit of the aftermath of war.   Within these cracks Beth's dead has become an addict to his pain meds because of the lack of care with his injury.  If he was properly treated to start with none of this would have happened. 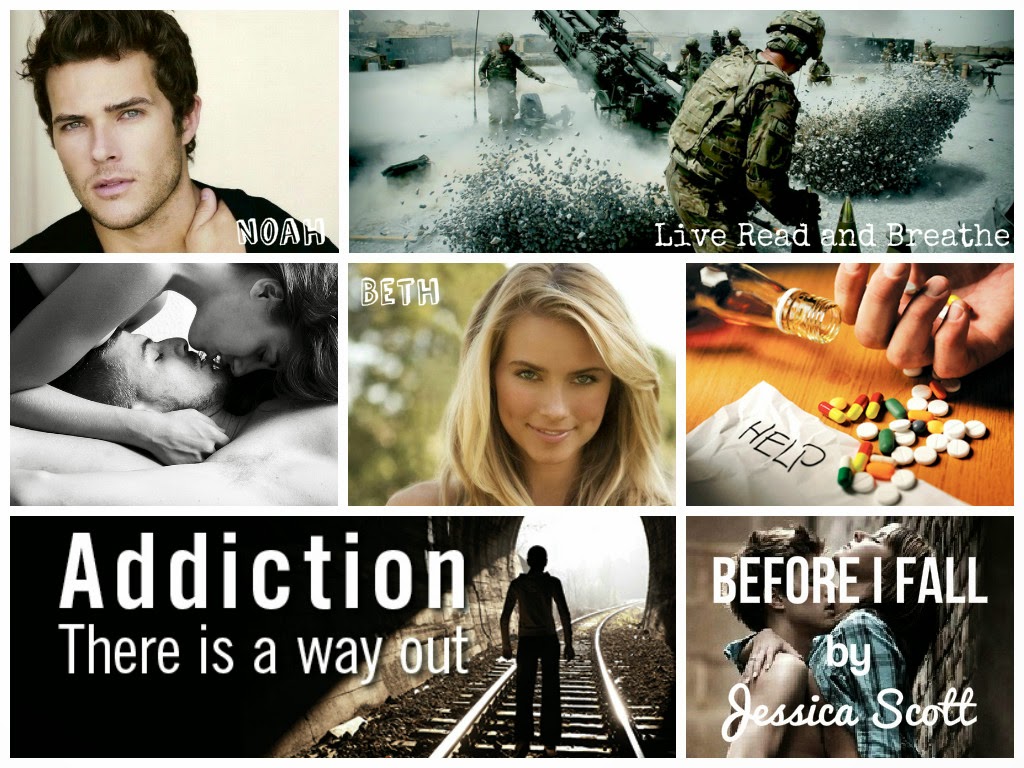 Beth needs to change this and the only way she can is by taking on all the responsibility.  To stay afloat she's working multiple jobs while going to school to eventually get a better job which will hopefully provide health insurance for her and her father.

On one of her jobs her teacher convinces her to help tutor Noah Warren.  At first she is apprehensive because Noah is a past war veteran.  She's seen a side war that she doesn't have much patience for.  She quickly puts Noah into that clump.  After interacting with Noah he quickly changes her mind and they instantly fall for one another,  while at the same time both are keeping secrets from one another.

Noah knows what Beth has to deal with on a daily basis so he's scared that if she finds out the truth that she will leave him.  But secrets have a way of coming out if you want them to or not.  Unfortunately for Beth it is her final straw and she bails quickly.

"You're supposed to stand with someone you love, not cut and run the first time things get a little rough."

After dealing with more stress from her father and her new broken heart she is quickly reminded of that not everyone is the same way and there are reasons for peoples choices if she just takes the time to listen to them.

During this book the characters are going to business school and I loved all the scenarios and comparisons that they make with war to business.  For so many people who don't serve they don't really have a clue what goes on at war and why.  And they especially don't know the consequences and reality that has cost the people who served for our countries.

It was a sweet story about second chances.   I don't know much about this topic but as always reading books from Jessica Scott, I feel the heart and tribulations of all the characters.  The only thing that was a bit rushed for me was the the speed of falling for these twos.  It felt like their romance has rooted and been going on for awhile but the actuality is that it has only been a couple of weeks.  If it had actually being a couple of months I would have felt even more of their pain and tribulations of their relationship.