Falling is easy. Landing without breaking your heart? Impossible.

Harper is no longer behind bars, but it doesn’t feel like it. Ten years serving time for a crime he didn’t commit have left him shut down, numb, and a frozen wreck over the simplest of choices.

He’s acutely aware of the dark-haired young man checking him out in the supermarket, but he’s too deep in panic mode to even meet the guy’s gaze. Afraid the slightest move will trigger a fall that will never stop.

Fresh off a long-term relationship with a controlling man, Malachi is stuck living with relatives who think he’s a waste of oxygen. The tall guy in the long, gray coat is the first bright spot he’s glimpsed in a long time…though the man’s unblinking stare at a bottle of shower gel is a touch alarming.

Hard experience tells both of them to turn away before lust turns to hopeless attraction, and inevitably to disaster. But once their sparks connect, the arc of electricity is too strong to deny. Even if the cost is too much to bear.

Warning: Contains an ex-con with disaster written all over him, a boy toy who’s trouble with a capital T, a damp old British house, compulsive meddling, and enough hot sex to cure the severe case of nervous babbling.

I can't believe this, but this was my first Barbara Elsborg book that I have read.

I know, I know. How did this happen?  After reading this book, let me tell you that this definitely won't be the last.  I loved it!!!! The writing was great.  The story was amazing.  It's one of those stories that hooks you in and stays with you for a long time afterwards.

Harper has just been set free from a crime that he didn't commit.  And now he has to readjust to living in the real world again after being a bit broken from being in prison and wrongly accused.

Malachi is down in his luck and just wants a break.  Malachi's mouth gets the best of sometimes causing him to not always get the opportunities he deserves, but his heart is always in the right place.

Once chance sighting and Malachi fell, but what are the chances he will ever see Harper again. 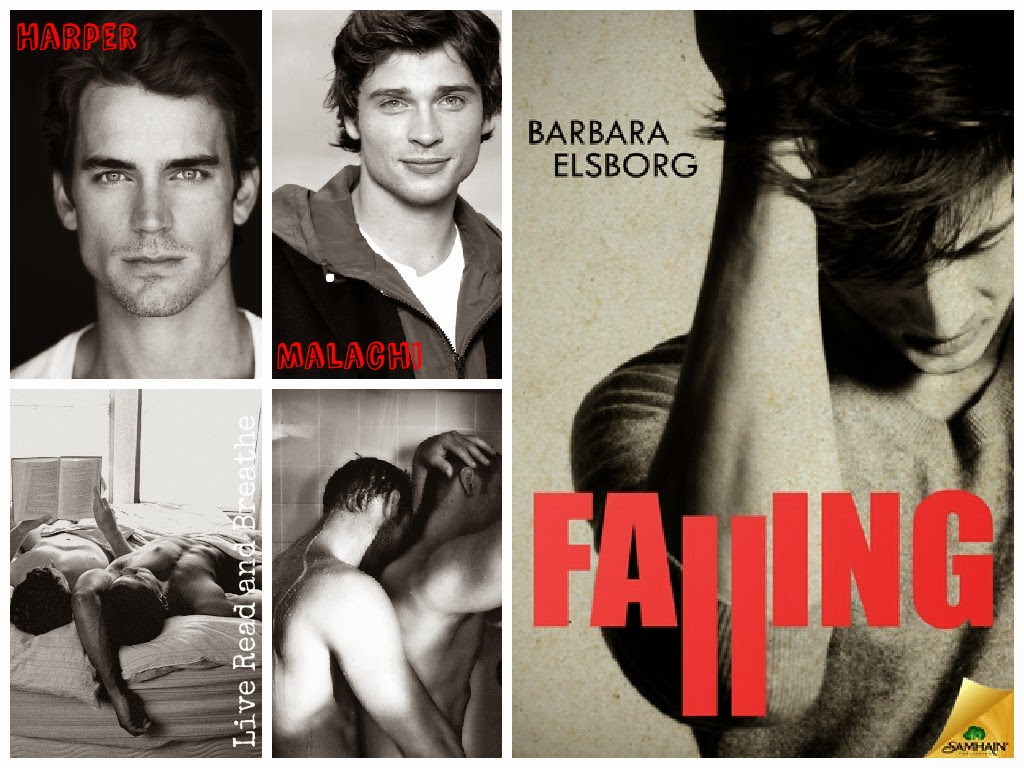 Fate is on both their sides and they find themselves officially meeting and wanting more.  They both instantly fall but Harper is a bit skittish.  Malachi and his loose tongue have help Harper trust and open up.  Once Harper gives Malachi is biggest secret scared that he will run, but so pleasantly surprised when not only does he believe him, but wants to go to bat for him as well.

Harper's story is a heartbreaking one that you just feel for him and all that he has lost.  You just route for him to have any slice of happiness, especially where Malachi is concerned.  It's been 10 years for Harper but he wants Malachi badly.  Now that the secret is out, Harper can fall more.   Their tentative relationship was great.  I loved the chemistry and dialogue between these two.  There is just something perfectly matched between these two.

Malachi wants so badly to clear Harper that he reaches to his past to help win Harper his freedom.   Harper used to think he wanted his freedom but once falling for Malachi he realizes that that love is enough for him.   Unfortunately Harper's ex is not getting the picture and trying to make Harper's life hell, while Malachi's ex boss is also trying to destroy Harper's house.  These two already had an uphill battle but now you add all this nonsense and its start to be a rough road for each other.  Thankfully they have each other.

They both can't fall anymore but the past and present are colliding causing tons of havoc for these two.  With everything on the line they both have to give up something to find their HEA.

Falling is easy. Landing without breaking your heart? Impossible.

This book was great.  I love books that are carefully layered with different elements going on but flawlessly come together.  This layering creates so much more depth to a story instead of the only angst being about the couple.  Instead the other layers help to deepen the connection while adding suspense and intrigue to the story to get the reader so captured that they can't put the book down.