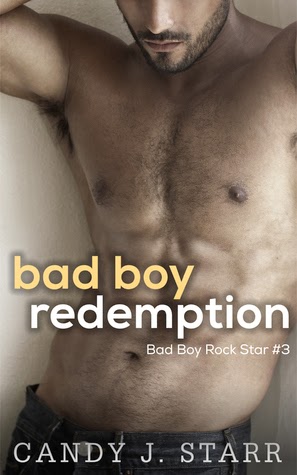 Life is sweet for Hannah and Jack. Finally, they are together and Jack’s band, Storm, have been signed to a major label after completing a successful tour.

Then tragedy hits the band, sending Jack off the rails. Hannah wants him to make peace with the demons from his past but he refuses to face up to his issues. Meanwhile, Hannah has problems of her own when her father’s crimes are exposed, and are much worse than she’d ever expected.

Are they damned beyond repair or can their love redeem them?


This is the third and final book in the Bad Boy Rock Star series.

Source: eARC for Honest Review Courtesy of Author
Genre: NA Contemporary Romance
Part 3 in a series and needs to be read as a series.
My Bad Boy Redemption Review...

Finally we get to find out if Jack and Hannah get their HEA.  Life with a rock star will always bring trouble but life with Jack Colt is so much more complicated.

Jack and Hannah should be in the honeymoon stage of their relationship but instead Jack's demons are starting to strangle him.  Needing no more issues to their already vulnerable relationship tragedy happens leading Jack into an even darker place.

As Jack spirals downward, Hannah starts to get more and more of a back bone.  She has always come across a bit weak to me in the last two books but here she really started to shine and take control of her life and all of her shitty situations.

Jack and Hannah don't have an easy road to their happiness instead it is filled with twists, turns and many bumps but in the end it is still their HEA.

I did like seeing the growth of Jack and Hannah even though I will admit Jack was a grade A jerk off at times.  I was happy with how the ending finished with these two.