Lay It Down (Desert Dogs #1) by Cara McKenna - #bookreview 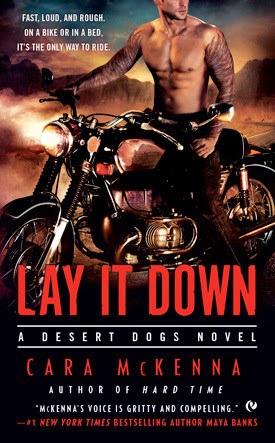 Backbreaking days, wild nights, and the hard hum of steel between your thighs...

That’s a life well lived, according to the Desert Dogs—four friends who call Fortuity, Nevada, their badlands home.

Vince Grossier is the self-crowned outlaw king around here. But when Fortuity’s slick new mayor invites a casino development to town, greed isn’t far behind—and it claims Vince’s good friend as its first casualty. With the law turning a blind eye to the mysterious death, Vince must seek his own brand of justice. The pretty photographer hired by the developers might be the key to uncovering the truth. And she’s a temptation too good to pass up.

Finally free of a controlling ex, Kim Paget’s not looking to be taken for a ride—not on the back of some tattooed roughneck’s bike and definitely not in his bed. But when she uncovers evidence supporting Vince’s suspicions of murder, Kim must entrust her safety to a man whose body threatens danger of a whole different kind.

My Lay it Down Review...

I don't think you can go wrong when you have the combination of Cara McKenna and a bad ass biker.

Vince Grossier is a bit of a bad ass but so loyal to his home town. Kim Paget wants free of people telling her what to do and finds a bit of freedom in a town called Fortuity.

For Vince and the locals they are pissed when big developers are coming in and trying to take over their small town.

After Vince loses one of his best friends he starts to become suspicious of his untimely death.

"Alex was the most goddamn responsible alcoholic I ever met."

No one but Vince believes his unfound suspicions but he won't let it go.  The moment Kim strolls into town he instantly wants to find out more about her since she doesn't fit in to their ways but he sure wants her too. 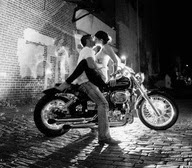 Through Vince and his psychic mother they convince Kim to stay and help with what he suspects really happened to Alex.  The more they dig the more they find causing others to start to believe that Vince is on to something.

"Used to be I was the shadiest person in Fortuity. I'm really starting to miss those days."

I truly loved this book.  I am such a huge fan of Cara McKenna and she so did NOT disappoint with this little gem.   The more shit was getting stirred in Fortuity the deeper Kim and Vince were connecting.  This book had so many elements and kept me hanging on for the whole ride.  All the mysteries weren't solved and now I can't wait to find out more about these desert dogs.

I loved the format about this book and all the things that were in it. So many details and layers to this story and the series has so much potential.

Posted by Live Read and Breathe at 21:20