Taking It All (Surrender Trilogy #3) by Maya Banks - #bookreview 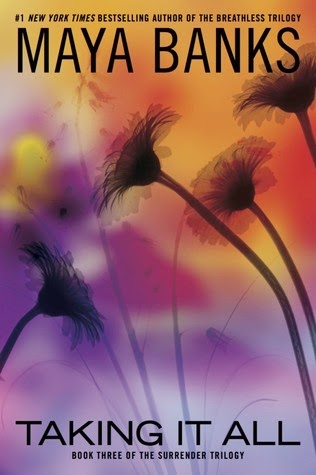 Taking It All (Surrender Trilogy #3)

Chessy and Tate have been married for several years. In the beginning, their relationship was everything she wanted. Passionate. All consuming. She offered her submission freely and Tate cherished her gift with a tenderness that made her feel safe. Content. Wanted. And loved beyond all measure. But as the years have gone by, Tate has become more immersed in making his business the success it has become, and Chessy has taken a back seat to his business obligations. Growing unhappier with the status of their once blissful marriage, Chessy knows that something has to give. Or they stand to lose it all

Tate loves his wife. Has always loved her. Providing for her has always been his number one priority. But lately she’s seemed unhappy, and he’s worried. Worried enough that he arranges for a night together that he hopes will reignite the fire that once burned like an inferno between them.

But a business call at the wrong time threatens everything. Chessy’s safety, his concentration, his wife’s faith in him as her husband, a man sworn to love and protect her above all else. Gutted with the realization that he’s going to lose her—has already lost her—he readies for the fight of his life. Whatever it takes, he’ll get her back. And prove to her that nothing is more important than her love. And that if she’ll allow him to prove himself one more time, he’ll take it all. Everything. But he’ll give far more back. Himself. His undying love.

My Taking It All Review...

Throughout this series I have been dying to find out what was happening to Chessy and Tate and now we finally get to see it all unfold.

I have always loved Chessy throughout the whole series as I did Joss.  With Kylie oddly enough I liked her in the first and third book because she is a loyal kick ass friend but I didn't love her so much in her book.  But with the guys I have absolutely loved Jensen and Dash but Tate has always been the unknown.

Here we find out why Tate is being an unbeknownst douche canoe.  He only wants to take care of Chessy but his eye on the prize has become clouded and his has lost focus of what his prize is.

Chessy is too blame as well because she hasn't opened the lines of communication and acted like a doormat.  So if she talked and Tate opened up his eyes then they would not have had so much heart ache.

Once the lines are finally opened after Tate's king of the assholes moments things start to look like things are back on track.  The only thing they have to patch together is there Dom/sub relationship and things should be swimmingly.  As Tate moves mountains to make his relationship first he does the unthinkable again and tops his worst moment with being an irresponsible Dom which is unfathomable in their world.

After this moment Chessy has no choice to leave.  With this choice it blows Tate's world wide apart that he has to make changes or he will lose everything.   As Tate and Chessy try to mend fences Kylie & Joss are finally getting their HEA's.

I have to admit this was my favorite of the series.  Lately with Maya's books they have been hit or miss with me but I am glad to have a hit with this book and this series.