My First, My Last by Lacey Silks - #bookreview 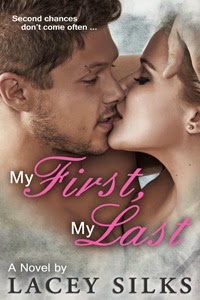 My First, My Last

Fate has kept them apart for twenty years.
Their roads hadn't crossed and the stars didn't align until now...

Matured, more experienced, pierced, tattooed and hot as hell, Adrian steps back into Mia's life to reclaim his first love.

And the moment she sees him she can't even remember her own name.

Adrian Reed had always remained in Mia's heart. After all, he was her first boyfriend and the man she'd lost her virginity to, but that was twenty years ago. His sudden appearance at a bar, on a girls night out, has Mia acting like the fifteen year old girl she was when they parted.

But life now is not as simple as it was twenty years ago. With two kids, a hopeful ex-husband and new insecurities, Mia finds opening up to a new relationship more challenging.

Will she give her first love another chance, or will she push him away, this time for good?

Gah! I wanted to like this book so much because the idea of the story had such huge potential but the whole thing fell quite flat for me.

Right from the beginning something about the heroine irked me, I didn't even realize what her name was until half way through the book.

The idea of this book is that two people were lovers twenty years ago and circumstances separated them and now twenty years, kids and failed relationships later they find themselves with a second chance.


"Fate. Second chances. Because I can't stand living without you anymore. I can't stop asking myself all those what ifs. What if we'd stayed together, what if I hadn't been with someone else when you came back that one summer?  What if I'd kept writing after I didn't hear from you? All the what ifs I've collected through my life. A bagful, you could say. I've got one of them answered at least: what if she tells me to leave right away?"

From the first words on the page,  Mia came across as weak and whiny.  Her first love Adrian comes rolling back into her life causing her heart and libido to wake up after a long slumber. Adrian asks her for a chance to reunite which she immediately agrees to but she wants to take it slow. Ok, at this point even though something about her annoys me I'm ok with this but then she goes home and her cheating ex husband is there and because her sex drive is woken she toys with the idea if getting her horny rocks off with him.

This book was ok. There were so many details thrown into this book that really didn't add to anything going on in the story.  I think they were to build character but instead for me it was the opposite effect. I did finish it in the hopes it was going to get better as some books do but unfortunately for me that was not the case.

2 Not so much thumbs up!