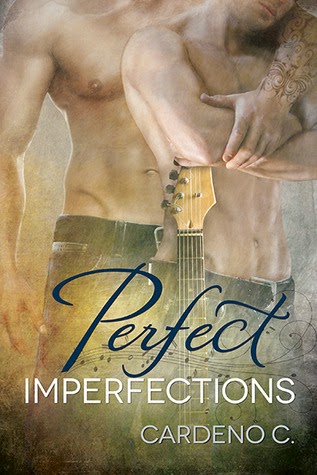 Hollywood royalty Jeremy Jameson has lived a sheltered life with music as his sole focus and only friend. Before embarking on yet another international concert tour, he wanders into a bar in what he considers the middle of nowhere and meets a man who wins him over with his friendly smile and easy-going nature. Accountant slash bartender slash adventure-seeker Reg Moore has fun talking and drinking with The Jeremy Jameson and can’t say no when the supposedly straight rock star makes him a once in a lifetime offer: keep him company on his tour by playing the part of his boyfriend.

Listening to music, traveling the world, and jumping off cliffs is fun. Falling in love is even better. But to stay with Jeremy after the stage lights dim, Reg will need to help him realize there’s nothing pretend about their relationship.

Straight to gay one of my favorite MM themes.

For Jeremy Jameson he is tired off all the bullshit that comes with being a rock star.  A chance meeting to Reg Moore and Jeremy realizes that he craves companionship so he asks Reg to be his pretend boyfriend since he is straight and come on tour with him.

Often you hear about a gay man covering with a female but not usually the other way around.  Reg agrees to this proposal because he sees something in Jeremy that even Jeremy doesn't see and plus he wants to travel.

As the tour progresses Reg and Jeremy get closer and closer.  Reg is a patient man where as Jeremy is a bit ignorant and sometimes whiny and a bit of a diva.  For most Jeremy's ways would get on your nerves but not for Reg, he wants to take care of Jeremy.

As the tour progresses even more people start to speculate and doubt the validity of Reg and Jeremy even though now they are straight cuddle buddies.

The closer they get Jeremy FINALLY starts to catch on and just maybe he might not be straight.  With this revolution he also finds out that Reg is gay.

How he didn't know that I have no idea.  As the pressure of the media weighs on them the more they finally give into their wants and wishes.

I really did like this book even though Jeremy was a bit whiny and weak for my tastes.  The connection between the two was sweet and honest and smoking once Jeremy got what was going on.

Posted by Live Read and Breathe at 22:40