The Truth About Leo (Noble #4) by Katie MacAlister - #bookreview 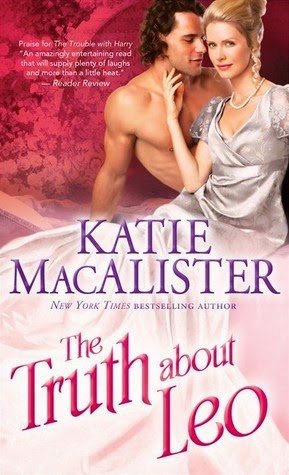 The Truth About Leo (Noble #4)

Dagmar Marie Sophie is a poverty-stricken Danish princess whose annoying royal cousin is about to have her stuffed away in a convent. When she finds a wounded man unconscious in her garden, she sees a way out of her desperate situation.
By Lying to Leo?

Leopold Ernst George Mortimer, seventh earl of March, and spy in the service of the king, finds himself on the wrong end of a saber and left for dead. He wakes up not remembering what happened...in the care of a beautiful woman who says she is his wife.
Back in London, Leo-with the help of his old friends the eccentric Britton family-sets out to unravel what he's forgotten... Is Dagmar truly the wonderful, irrepressible woman who makes his heart sing, or is she a dangerous enigma bent on his destruction?

Source: eARC for Honest Review Courtesy of Sourcebooks Casablanca
Genre: Regency Romance
Part of a series but can be read as a standalone

My The Truth About Leo Review...

Gah! I always forget how awesomely fantastic Katie MacAlister's writing is.  She has such humor to her very quirky characters.  It has been a while since I have read one of her books or even a regency romance but I am so glad that I got to read this little gem.

The banter and the interactions are priceless the only thing that may be a bit of a downer was at times the brilliant banner was sometimes too distracting to what was actually going on within the story.  Which was Dagmar a danish princess who needed a way out of her home land and when left the gift of a near dead wounded soldier she found her passage to England if she married this soldier.  Knowing that he most likely won't live much longer she marries Leo, who just happens to live and wakes up on their return trip to England.

After being very surprised to being married Leo warms up to the idea and Dagmar's distracting ways,
It has been so long since I read anything from this series that I feel if I had re-read the previous books I would have been more enthralled to the story by remembering all the other great characters.

As Dagmar and Leo fumble through the new marriage love blossoms and weird things are happening to people around this duo. Trying to find their happiness gets sidetracked with murder, chicken pox, and Nick finally finding his way.

Posted by Live Read and Breathe at 22:13