The Fight for Us:

When Isaiah moves his teenage daughter Natalie to a new town, there is little doubt he’s running away from the past. But what should have been a fresh start for them ends up fraught with pain and heartache when Natalie becomes the victim of intense bullying at her new school.
When Joss is called to a meeting with the high school principal to discuss her daughter Harper’s involvement in the bullying of a new student, she’s shocked to say the least. Her daughter can’t possibly be that child.
It’s a rocky start for Joss and Isaiah as they try to set their daughters on the right path. But there is more to Joss’s and Isaiah’s connection than just two teenage girls. Joss’s and Isaiah’s attraction to one another is undeniable, regardless of their fractious start. But his soul is broken, and as much as he’s drawn to her, he’s equally terrified of what that means.
Is Isaiah strong enough to let her get close to him?
Life sometimes forces you to make those choices whether you’re ready to or not. And when Joss’s life is turned upside down, Isaiah has to decide if he’s ready to leave his past behind and live again, or if he’s going to watch what he’s come to care so much for slip away. Isaiah’s fight is profound. Joss’s is too. And their strength to withstand it all is brutally tested.
Sometimes the willingness to fight for another is all a person has left to give. And sometimes the fight is the most important gift of all.

Buy The Fight For Us

Cohen is a man apart on Bristol Island—an outcast loved by all but separated by his position within the community. Dylan is the newest resident in town, but she arrives with a dark secret and a desire to keep it buried.
But when burning attraction is thrown into the mix, his job and her secrets are quickly forgotten—that is until one impetuous decision renders a relationship off-limits, unethical, and utterly inappropriate.
Living next door to one another on the island’s isolated peninsula guarantees their paths will cross time and time again. With fate tempting Cohen to ignore his conscience and, for the first time in his life, gamble with the rules, will he risk everything for Dylan?
And what happens when Dylan’s past suddenly catches up to her? Will she find the strength to bare her soul to him? Or will she let her secrets take them both down?
Sometimes the inappropriate relationship is the most appropriate of them all.

Elizabeth Finn is a multi-published contemporary romance author. Her passion is creating stories packed full of believable conflicts, characters who leave you rooting for them, and romance that might just short-circuit your e-reader. She likes her characters flawed, but they always find the best part of themselves on their journey. And her readers find themselves devoted to her honest and heartfelt voice.

My The Fight For Us Review ...

This book was near perfection for me.  I LOVED IT!!! I was in a bit of a reading funk again and this book pulled me right out.

What I loved about it:

The only thing I didn't love which was just a itsy bitsy thing was the quickness or progression of their story.  Things like he wanted his 'old Joss' back but she was only in a funk for like 2 days and she was very traumatized so, I felt her funk was warranted.  Their relationship and how they dealt with conflict progressed very fast, almost too fast .  But if you can past that which I did then the book was A-M-A-Z-I-N-G.

The whole time I was reading this book I felt like I could imagine it on the big screen. I think it would make an amazing movie.

The way it was set up was awesome.  The book was divided into 4 parts.

The Fight - The first was how they met. 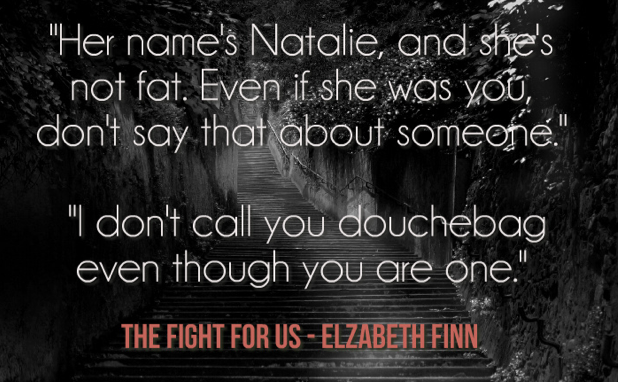 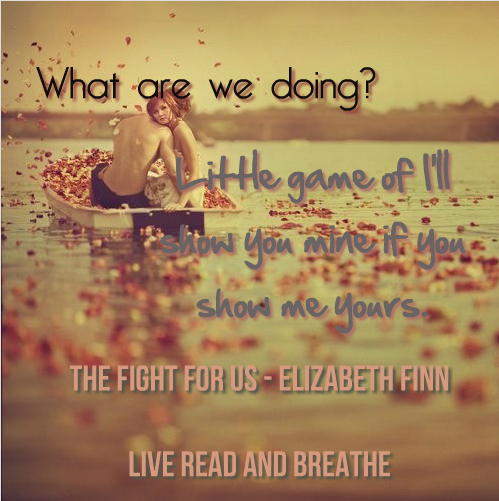 His Fight - The second was dealing with his demons. 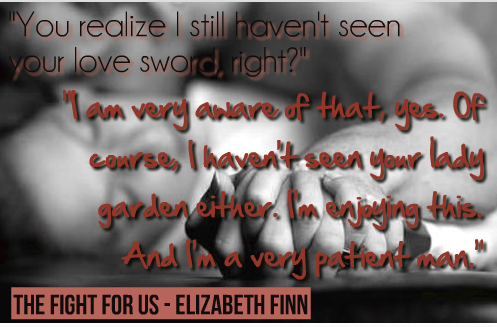 Her Fight -The Third was her demons 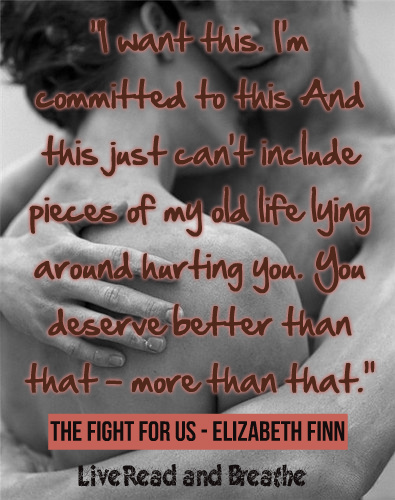 The Fight For us - The 4th was fighting for relationship with all their hardships coming to the surface. 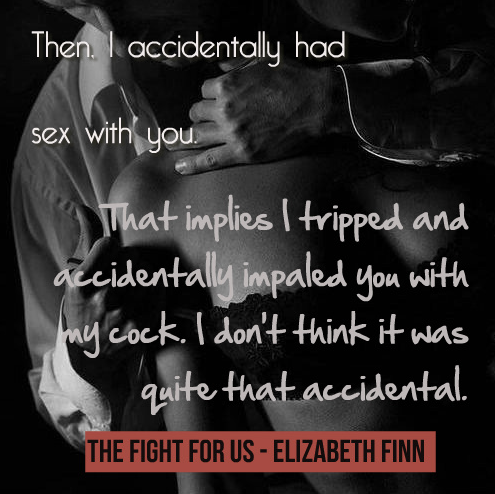 You felt their pain and were routing for them the whole way through.  I absolutely loved this book and all that came with it.  It was a beautifully emotion filled journey and so worth the ride.  Thank you Elizabeth for the amazing opportunity to be able to review this book. ;)

I have to admit that this book took me awhile to get ensnared.  I don't know if I wasn't in the mood for the storyline or what, but I did have to put it down a few times and re-start it but, once I did get into it I fell in love with it.

There was such angst with the push and pull of these two.  Dylan is a quiet writer who just moved to Bristol but has a past and a reason to being in Bristol.  Cohen is the Bristol doctor where he practices where he grew up.  Brought back to the island by his old friend Joss and his new friend Isaiah, who we originally met in The Fight for Us, which is one of my favorite books.  This is considered a standalone book yet part of the Bristol island series.  I read it after The Fight for Us.  It wasn't needed to read before, but I felt like it made my reading experience better for reading it first. 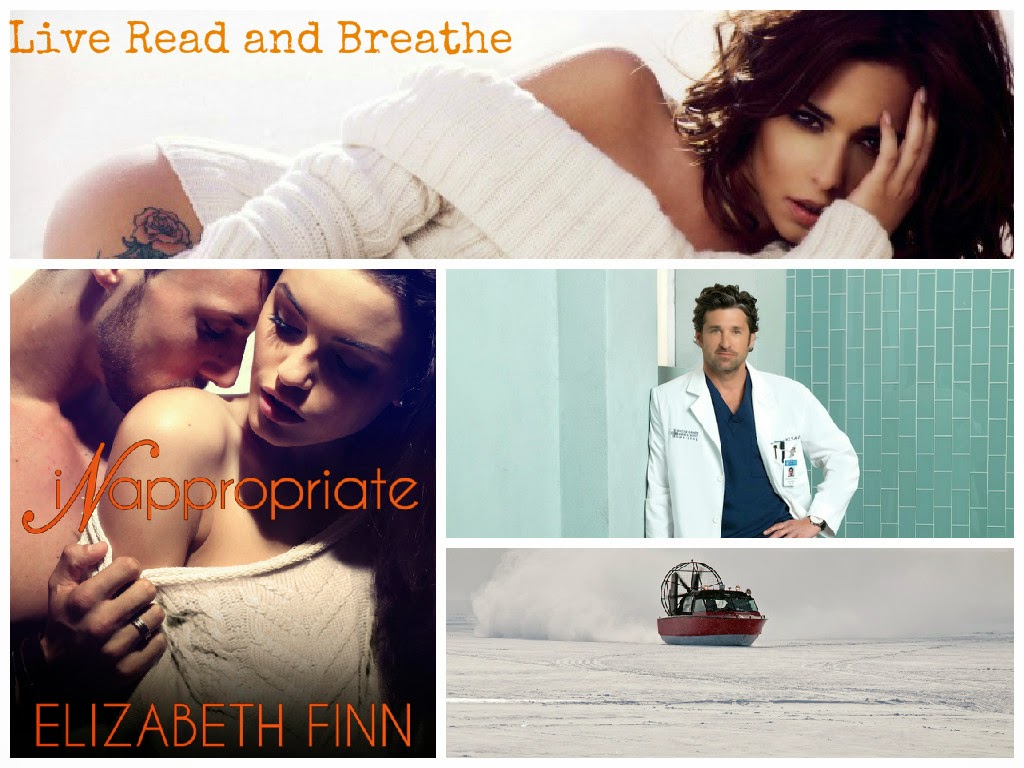 Dylan and Cohen are new neighbors and are immediately smitten with one another,  but life circumstances puts them in a very awkward and inappropriate situation making their new feelings vulnerable and left on shaky grounds.


"Our past only has the power we give it, and I think you're giving yours too much."

They have to learn what is right and wrong for them in a sticky situation.  I love Elizabeth Finn as she has such a knack at making the heroes such asses at times but still super loveable.

Their desires may be inappropriate but their feelings are real.  Dylan and Cohen have an uphill battle to make it over to the side of appropriate in a very forbidden and inappropriate situation.


"I want to bet he last man in your life to make you come-the only one."

Things I loved with this book:

Great book! Great Series. Can't wait to read more from this author and this series.