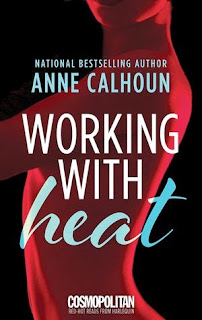 For now, Milla Jackson is an American in London, but she's also been an American in Paris, Rome, Prague and more. She's working hard to combine her love of travel and growing social media presence into a career, even involving her followers in her (somewhat dismal) dating life. When the combustible heat between her and her best bloke, Charlie, explodes, she's unprepared for the secrecy of "friends with benefits." Charlie's an artist who's already been burned by one woman who used social media against him. He's determined to keep his hands on the glass he works with--and off the irresistible Milla, who's sure to share every detail with her followers. Will their best intentions survive a secret relationship? Or will the heat transform their fling into something that can overcome Milla's fear of permanency and Charlie's reluctance to trust again?

My Working With Heat Review ...
I'm a huge fan of Anne Calhoun so as soon as I saw this title I jumped at the chance to read it.  With Anne's stories they are usually full of erotica but a realness to her characters and stories that you can relate to.  In this story there was less heat but still loads of sensuality.

Milla is an American girl living in England, who is a part time travel blogger and works at an art gallery.  She happens to live with two roommates/friends Kaitlin and Elsa, whom they rent from their friend Charlie.  Charlie is a bit of mystery.  He's sweet and charming but holds back because of his own known past.   He's also a great artist who's medium is glass.  Through Charlie's art you get to see more into his soul and find out more about him. 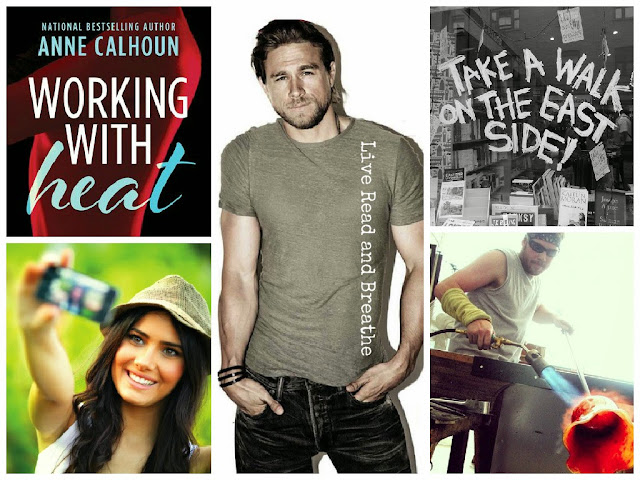 Milla is a carefree type of girl who likes to travel, social media and is on the dating scene.  As she uses social media to date and connect with the world its also what holds Charlie back.  Weekly the group of friends conjures together for the weekly pub quiz night and post hash one of Milla's dates.  After her latest round of bad dates her and Charlie grow closer and cross the line from friends to lovers.  Not wanting to ruin that line they toe on it very carefully.  Sometimes they step over it and other times Milla jumps away and back to public dating.

As much as I got that part of Milla, I didn't quite connect with this part of the story because if she is so 'in like' with Charlie why continue on with this public facade of dating?  They quickly learn that once the line was crossed you never really can go back, but with Charlie's reluctance because of his past and Milla's need to explore.  Where does that leave them?

Once again Anne has delivered another good story that can connect with many on many different levels.  For a novella it was nicely paced and evenly rounded filled with sensuality, love and a bit of angst.